Three things the Twins need to do to compete in 2015: Part I: Fix the pen.

At first read, the title of this series sounds very much like A Midsummer Night's Dream: Do I dare suggest that the team that went from 99 to 96 to 96 to 92 losses the past five seasons needs to do only three things to compete?   The next number to that Arithmetic Progression up there is between 88 and 92 and that is not competing by any means.   Let me explain my train of thought here before the nice kind people in white come and get me to warmer climates:  First: In order to make significant, measurable and effective change, you cannot focus on changing 20 things.  Too many balls in the air, some will drop.  Focusing of few things that you can change and make an effort to do so, is much more effective.  Second: I do believe that with the changes this off-season, the Twins removed a huge barrier to their success: Breaking ties with Gardernhire, Anderson, Ulger and Steinbach (even though they did not go far enough in my opinion, but this is all another matter,) is the equivalent of starting the seasons with (at least) plus five wins.

So that next number in that loss progression looks more between 83 and 87.   So those three things that need to be done, if done correctly and effectively, will be enough to give the Twins an extra 5-7 wins, putting that total loss range to 76-82 and that is not a losing record.  The top number of that range (86-76) is close to a wild-card number and likely, if the Twins get there, they will compete for the title in a weakened and more balanced Division.

The first thing they need to do to get there is to fix their bullpen.  And I hope that they know that this was a huge problem in 2014; as a matter of fact a bigger problem than the rotation.  I touched it a bit here, suggesting that they spend some more money and get another late inning reliever, even though this bird has flown already, there are similar possibilities, especially in a trade, outside the organization.  But there are potentially intriguing possibilities inside the organization.   Let's frame the problem first, and then let's look at what they have at hand, and explore potential solutions:


What they have at hand:

To see what they have at hand, let's create an imaginary construct called the league average reliever.  So here are the numbers (and I am focusing on the Twins' weaknesses here) of the league average reliever: xFIP: 3.67, SIERA: 3.34  (those 2 are pretty much equivalent, they correlate with 92% coefficient, so I will be focusing on SIERA only for simplicities' sake), K%: 22.2, Fastball velocity (FBv): 92.5, Swinging Strike% (SwStr%) : 10.5.

Here are how the current Twins' bullpen candidates (and "locks") performed in those categories in 2014.  If they are equal or better than the average major league pitcher, that number is in bold. For players mostly in the minors, I am including their K% in the minors (in parenthesis).  The other numbers are not available.

So, in other words, the Twins now have only 2 pitchers who were above the proverbial average pitcher in 2014:  Glen Perkins and Tim Stauffer. In a seven men bullpen, this is not very encouraging.  For the time being, let's pen in Perkins and Stauffer and look for 5 more names, at least one of whom has to be a lefty.  I assume that starting pitching prospects like Alex Meyer, Taylor Rogers, Tyler Duffey & Jason Wheeler, will be in AAA if they do not make the rotation, so these 5 are out of this discussion.

One wild-card is Mike Pelfrey.  I believe that he has the stuff to make an excellent late inning reliever, and make the jump the Glen Perkins and Joe Nathan did before.  However, Pelfrey has been a better starter than either Perkins or Nathan, so his ceiling as a late innings reliever is higher than both.  Pelfrey has pitched on 2 games in relief (for the Mets in 2007) thus if that transition happens, it should happen as soon as possible, to be able to pitch in consecutive days when the season starts.  Why do I think he can be a good late innings reliever?  His fastball is explosive when healthy and is his primary weapon.  As a starter, he has to mix his pitches.  As a reliever, his 92.5 mph fastball, can easily gain 3-4 more miles an hour.  His curve ball is a good complimentary offering and he would have the luxury to drop his non-successful slider and cutter and just occasionally mix his less than stellar split finger change.  This makes 3.

As far as righties go, the Twins will likely take Casey Fien up north (and hopefully not use him in high leverage situations, because he is below average in all of the above categories, and he is one of the major drivers of the low GB%, since his is only 32.1.)  Fien would not be my choice.  I would rather see what Trevor May can do as a reliever.  Similar discussion with Pelfrey, his 91.9 mph FB average will get to the mid 90s as a reliever, plus he had the second best K% of the group in the majors and a respectable SwStr% (mostly as a starter, and will get better as a reliever.)  And the cherry on top is that we led the 2014 Twins' pen with 2 Ground Balls per Fly Ball and a 57.1% GB%. May projects as an above average reliever.  This makes 4.

Need a lefty, and from that group, I'd go with Brian Duensing, and not because he is the most veteran.  Brian Duensing (like Glen Perkins) regressed a bit in 2014, mainly losing about 1 mph velocity in his fastball and losing effectiveness in his slider.   That translated to a K% drop from 20.9% to 14.4% and a SwStr% drop from 10.5% to 8.6%.   That said, he had the highest GB% from all lefties in the Twins' pen (45.7%) and has by far the highest velocity from the lefties left in the list.  As far as offerings go, I think that Duensing has too many pitches.  Losing either the slider or the curve (both have been inconsistent) and focusing on one, plus regaining his 2013 form (which was at or above the average pitcher's) will do wonders for the Twins.  I hope that the new pitching coach will help in these regards.

This makes 5 which leaves a lot of candidates for 2 spots.  I think that the Twins will need someone who can fulfill the Anthony Swarzak role, but all of the above have been starting pitchers and there is flexibility, which means that if (e.g.) Tommy Milone loses out for the fifth starter job, he does not have to be the long man in the Twins' pen.  Having a long man by committee, might actually be an interesting approach.  The most intriguing names above for me for the last 2 spots are Aaron Thomson, Stephen Pryor, J.R. Graham, Ryan Pressly and Blaine Boyer.  Pryor use to throw fastballs in the high 90s (career average 96.4) but velocity slipped due to injuries last season.  Very similar situation with the rule 5 pick, J.R. Graham and their former rule 5 pick Ryan Pressly.  Blaine Boyer is the veteran in the group, with good track record and might make the team.   As far as another lefty, Thomson is ahead of Thielbar (who in addition to be below average in every respect, has a 31.8% GB%) in my book.

Should the Twins go out and target a "known quantity" like Jonathan Papelbon (2.86 SIERA, 24.3 K%, 12.1 SwStr%, 91.2 mph, 41.9 GB%) in a trade? I think that it will definitely help, but putting Pelfrey and May in the pen might work equally well.  I think that the bones are there.  Perkins and Duensing should rebound from regressive seasons, Stauffer was a good acquisition, if you break down the numbers, and they will find 2-3 more relievers.  But they have to take the best 7 up north, which means that they might have to make tough choices regarding below average extreme fly ball pitchers like Fien and Thielbar, even though there might be the belief that they are still under scholarship. 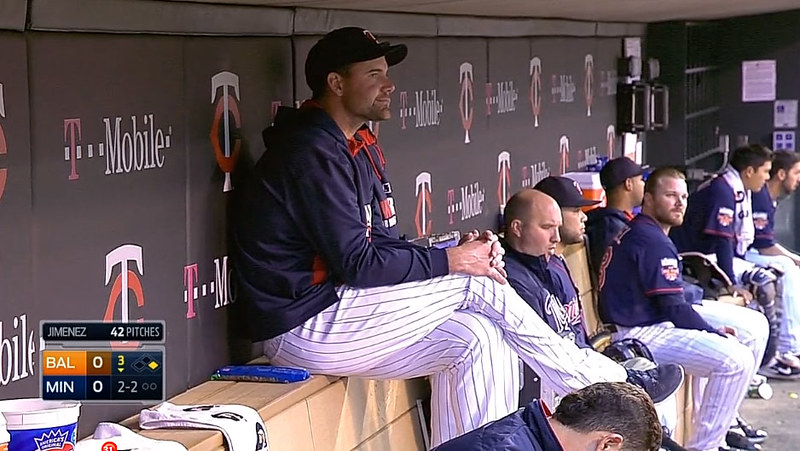