How much is Michael Cuddyer worth?

I am really not going to mention the 2011 season as a whole for the Twins. Just looking forward to the 2012 season hoping for a phenomenal rebound alike that of 1991. It has been reported more than once that one of the Twins' priorities this off-season is re-signing Michael Cuddyer who is a free agent for the first time in his career.

Cuddyer comes off a season where he hit .284/.346/.459 with 20 HRs, drove in 70 and also scored 70. He has been the brightest offensive point for the team last season (as a whole); he also displayed the willingness to play multiple positions (unlike in previous seasons,) which was valuable to the Twins because of the multitude of injuries. He arguably had the best season of his career, looking at WAR (wins over replacement), accumulating a 3.1 WAR, which ranks him as the 81st best position player in the majors in 2011, based on that metric. And no math classes are necessary to figure this out.

In addition, he has been given accolades from the press and the Twins' brass about being a good clubhouse leader. He will be 33 on the beginning of the 2012 season. It has been reported that the Twins have offered him a 2-year, $8 million per season contract that he rejected and it looks like he is willing to explore the market before he commits.

What is a reasonable price (in annual contract terms) for Michael Cuddyer?

Here is one analysis:

I looked at all the 2011 contracts of OF/DH/1B types in MLB (including Cuddyer's), looked at their WAR, calculated average $/WAR and calculated how much 3.1 WAR (Cuddyer's WAR in 2001; career high) is worth based on the average $/WAR for OF/1B/DH for 2011. To keep things fair, I did not add players on minimum salary (like Ben Revere) and to keep things not going mathematically out of hand, I used players where WAR >= 1 for the calculations. Here is the spreadsheet: 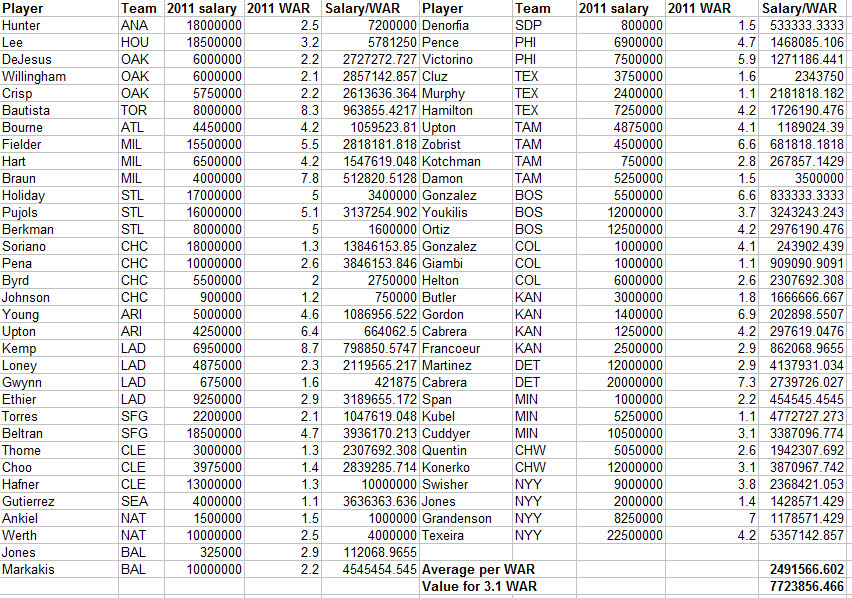 If you look at those contracts, a lot of them were signed in other financial times, before the country was hit by a recession. If you take the contracts signed before the 2010 season from the spread sheet above it looks like this: 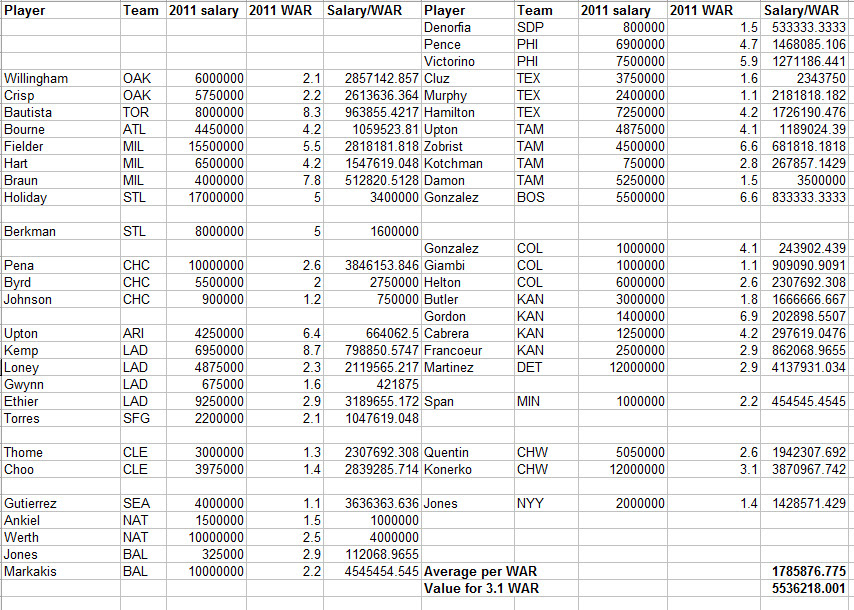 This, arguably. might provide a better picture for a fair price in 2011. The bottom like with this calculation is a little less that $5.6 M a year.

I think that the 2 years, $8M dollar per year offer by the Twins was a generous one and reflects that the Twins believe that Cuddyer is a strong positive presence in the organization. This presence carries a close to $2.5 million premium for the Twins per year, based on his value these days and their offer. My opinion is that the Twins can do better for that money, if Cuddyer decides to keep rejecting that offer.