Can the Twins rebound? Part I: Looking at their history

In some respects, I do enjoy blogging more during the off-season than during the baseball season. I ind it more of challenging and rewarding mental exercise to venture into potentiality and looking at minutae, rather than describing actuality and game results. Why is that? a. There are many sources out there that do the latter, and adding another adds to the blasé feeling; b. the Twins' actuality was rather exasperating in more than a few occasions last season; and c. actuality becomes "history" after it is all said and done and it is much easier to examine it objectively.

One of the things that I would like to do this off-season is to try to examine whether a likelihood of rebounding from a fairly disappointing 2011 season. This is the first part of the series and I will be using the Twins' franchise history as a whole as potential roadmap for such an rebound. Has something similar happened to the Twins' before, or are we looking at uncharted territory? And if it has, what happened afterwards? An exercise like this lacks in acuity, but as Pearl Buck said, if you want to understand today, you have to search yesterday. And by "yesterday", I do not mean the Twins' history starting exactly 51 years from today, when Calvin Griffith announced his intention to move the Washington Senators to the Minneapolis/St. Paul south metropolitan area, but since the beginning of the American League. It is a shame that this club does not recognize its rich franchise history, from the ballpark to its web site (I find it very interesting that the "franchise history" link in the Twins' timeline page is deactivated - look at the left navigation bar in the linked page.) One of the unfortunate side-effects of this is that most Twins' fans today do not know that Stan Coveleski, Joe Cronin, Ed Delahanty, Rick Ferrell, Lefty Gomez, Goose Goslin, Clark Griffith, Bucky Harris, Walter Johnson, Harmon Killebrew, Heinie Manush, Al Simmons, George Sisler, Tris Speaker, Ted Williams and Early Wynn, all members of Baseball Hall of Fame, were associated with the Twins' franchise at some point, with Harmon Killebrew being the exception, because of his tenure with the team in Minnesota. I suspect that a lot of the Twins' fans (and probably even people employed with the Twins) do not know some of those names, or do not realize, for example, that Ted Williams was also associated with the Twins' franchise.

But that's another story and does have a lot of merit but deserves its own space. One another parenthetic note, that picture on top of my block is from Griffith Park, home of the Senators and was taken in the 20s. Back to the original (non-trivial) pursuit: Lets deromanticize the history of the Twins and examine the last season with the recent context and see how it fits with the previous history of the franchise. In other words, has something like this happened before, and if it has, what followed? Again, this is neither an exercise in either predicting nor in necromancing, but more of placing this period of Twins into the continuum of their existence.

For this I will use a simple tool, with a lot of notations overlaid and will work with visual pattern recognition. I am certain that a lot of the readers of this blog would be happy that I will not be trying to extrapolate and predict using statistical analysis. The following graph is simple: A reverse chronological order (i.e. 2011 is closest to the Y axis) line graph of the Twins' franchise wins every season down to the inaugural AL season of 1901. The division between Minnesota and Washington is indicated (big red line down the middle) as are attempts to identify a few eras/periods (blue vertical lines and notations on the bottom). Truth is that a couple of those could (and should had) be even further broken down, but this works for now, for the sake of (relative) simplicity. Few dates are also on the chart, so we can navigate, and 5 of times the franchise went to the World Series (won only the 2 last ones in MN) are also noted. For some reason, photoshop did not like the "WS" notation on the 1965 mark, but they went to the world series then, too. Six times overall. The franchise low in 1982 is there too. Here we go: 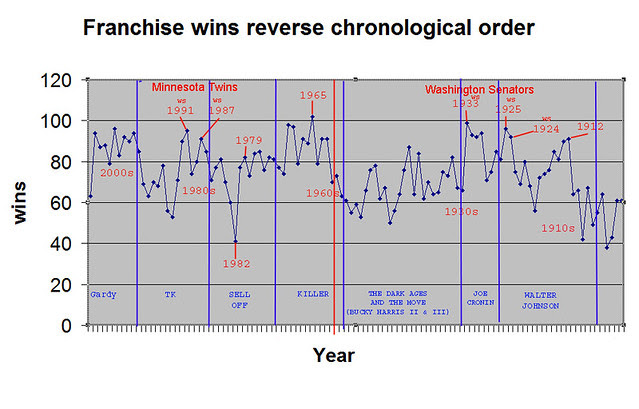 Bigger image in a new window can be found here

A few observations: The current era (Gardy Era and the late TK era) looks a lot like other periods in the Twins' history. It resembles the Killer Era (60s, most similar to it that others), the early TK era (mid 80s-early 90s), the late Walter Johnson and Joe Cronin Era (late 20s- early 30s.) Those were periods of time that the Twins and the Senators had sustained winning records and were competitive teams. Some teams in the earlier Walter Johnson Era were also competitive, but no more than a couple years in a row. Part of the reason for that was a fellow named Babe Ruth who played for a division rival from 1920 to 1930 (effectively,) and it is a major achievement that the Walter Johnson Senators dethroned the Babe Ruth Yankees in both 1924 and 1925 to represent the AL in the World Series. My visual clues bundle those teams with the following Joe Cronin Era.

The Minnesota part of the Killebrew Era, if we take a mulligan on the move year (1961), arguably has been more successful that the Ron Gardernhire Era. They went to the World series in 1965, taking the Dodgers to 7 games and losing a 2-0 three-hit shut out by Sandy Koufax in Met stadium in game 7. They also went to the ALCS in 1969 and 1970 (the first 2 years of division play.) The Early Tom Kelly Era (I should actually call it the Andy McPhail Era,) has been one of the most successful in the franchise. 2 World series trophies and 2 parades in wintry Minneapolis are hard to ignore. Also, from 1924-1933 the Senators went to 3 World Series (Late Walter Johnson and the Joe Cronin Eras,) arguably more successful than the resent past.

The next segment will examine other baseball teams in recent history (this millennium) which have rebounded from situations similar to that of the 2011 Twins. Let the hope torch burn eternal.

A contrarian opinion about the Twins' Starting Pitching

It is hard to look back at a 99-loss season and try to figure out what did not work, but it is necessary to just do that and try to pinpoint possible weaknesses that need to be solved. With a 99-loss season, pretty much nothing worked well, but prioritizing changes requires the identification of parts of the team that can be fixed relatively easily or by fixing them, it will make the biggest impact.

A lot of people in Twins territory, including fans and the press, and the Twins' management, as was referenced in the season ticket holder press conference a few weeks ago, see starting pitching as one of the weaknesses of the 2011 team, which needs to be fixed this off-season.

I examined that hypothesis, by looking at the performance of the Twins' starters in 2011 based on their on-field numbers. And the numbers disagree with that generalized belief.

3 years ago I devised a compound statistic measurement that indicates pitching effectiveness. Here I explain the idea behind the pitching effectiveness (or PE) measurement, and why I prefer it as an indicator of pitching performance independent of fielding or other external factors than other compound statistic measurements like FIP, xFIP and DICE. PE is (K/9*K/BB)/WHIP. A couple years ago, I devised another measurement expected PE or xPE, which is PE*(BABIP/.290), to further neutralize for "luck", reflecting what a pitcher's PE would be if his BABIP was .290 (League normal.)

Here is a list of the Twins' starters ranked by xPE for their 2011 performance. For pitchers who both started and relieved in 2011, only their numbers as starters are taken into consideration for the calculations. Also, the Twins' team average starter numbers are indicated as are the league average numbers. For comparison purposes, the numbers of AL starting pitchers who are considered as "Aces" and had the best starting pitching performances in 2011 are also included: 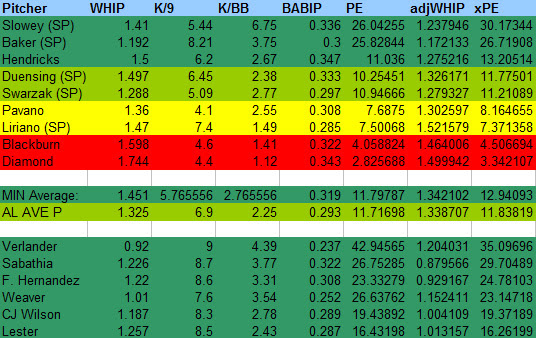 I included the following color coding: MLB average is green, above average darker green, below average yellow and well below average red.

A few observations (and I am sure that this is surprising to many out there) :


Ok. I know that this sounds pretty crazy and counter intuitive. It is contrary to what most Twins' fans, the press and the organizational brass believes. But the numbers do not lie; however the dismal results do not lie either? How do we reconcile these opposing facts? In other words, what happened if the Twins' starters pitched well?

Here are a few things that happened:

So how the Twins' starting pitching should look at 2012? What changes can be made and give better results?

So with these changes we are looking for a 2012 Twins' rotation of Slowey, Baker, Liriano, Swarzak and Pavano (or Duensing/Hendricks, if Pavano is traded.) I believe (and the numbers suggest) that this group can be successful in 2012 with better health, better management, better fielding and better defense. Despite what most people feel, the Twins' starting rotation was one of the (few) team's strengths in 2011.