Once upon a baseball season, there are these rare minor league players who seem to come from nowhere, are called up usually due to injury and do have an unexpected impact with the organization. You do not find those players on the top 10 talent prospect lists of a system, but players like this do exist. A recent example for the Minnesota Twins is Denard Span whose (albeit being a former first round pick) performance in the minors made the Twins to look for outfielders outside their system. Span came up in the 2008 season after Michael Cuddyer's injury and played well enough to win a staring position in 2009 and allow the Twins the luxury of trading Carlos Gomez for J.J. Hardy. Another similar case is Jose Mijares, who practically came out of nowhere in September of 2008 and solidified the left side of the pen for the final run.

Who are the potential dark horses in the Twins' minor leagues that might be 2010s Mijares and Span?

Here are my thoughts as far as the infielders go:

Danny Valencia is the popular choice. Actually, he is not that dark of a horse. It is almost anticipated (I should say "expected") by the Twins' fans (and front office) that Valencia will be with the club in 2010 sometime and will be the Twins' third baseman of the future. So, sorry Danny, the expectations (fair or not) are there for you.

However, there is another infielder in the Twins system who might surprise people this season. And he is Luke Hughes. Luke has a career minor league line of .270/.333/.421 including a .259/.344/.481 campaign in Rochester for 157 plate appearances before he was injured last season. The usual "knock" on Hughes is that he "is bad with the glove". My impression is that he is just playing in the wrong position, at 3B, instead of at 2B, which is his best defensive position. How good a second basement is he? There are not any advanced fielding metrics for minor leagues, I would have to resort to Fielding Percentage and Range Factor per Game (I know... but they can be just an indicator, and nothing more or nothing less). Lets look at some career numbers of 2B fielding:

ok, clearly he is not at the Punto/Hudson level, yet, but he is 25 years old. Let's compare his numbers with those of another Twins' second baseman:

That is pretty close, and Hughes is better with the bat and 3 years younger than Tolbert. If Tolbert's defense is serviceable, Hughes should be. With consistent playing at second base, he could turn into a Dan Uggla-type of player if he reaches his power potential as he gets closer to his prime. For comparison, Dan Uggla's career Minor League line is .276/.347/.442 (which is in Hughes' ballpark and that includes a .297/.378/.502 AA campaign line -569 PA- in his age 25 season, whereas Hughes has not played his age 25 season yet.) Dan Uggla's career fielding line in the minors was .962 FP and 4.41 RF/G. Does this mean that Luke Hughes can be the next Dan Uggla? No. But it means that their minor league hitting and fielding has been comparable so far and I would not be surprised if Luke Hughes is a dark horse for the Twins these season. 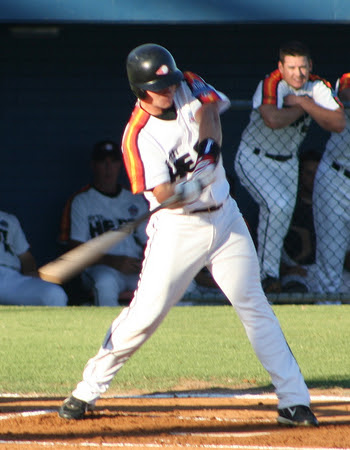 Despite of what Eric Olson wrote today, the AP Paparazzi did their job, and here is a photo of that elusive beard: