One of the Twins' maxims has been that they are proud to be doing things the Twins' way, which translates to "doing the little things right", in other words: hitting and running, advancing runners to scoring position, taking an extra base here and there; in other words: small-ball.

How has that pride and joy helped the Twins during the Gardenhire years? Let's examine the facts. One way to look at it is that if the method is successful, one would assume that a team would need fewer hits to score runs. That would be efficient way of playing. In this way, you make the best of each hit and score more runs than the competition with fewer hits. This is a recipe for winning. The following graph spans every season from TK's last season, 2001 (1) to 2009 (9). I am plotting total hits over runs (i.e. how many hits it takes to score a run) for the Twins (blue), the AL average (burgundy) and the AL champion (yellow; for 2009 I am using the team with the best AL record, Toronto): 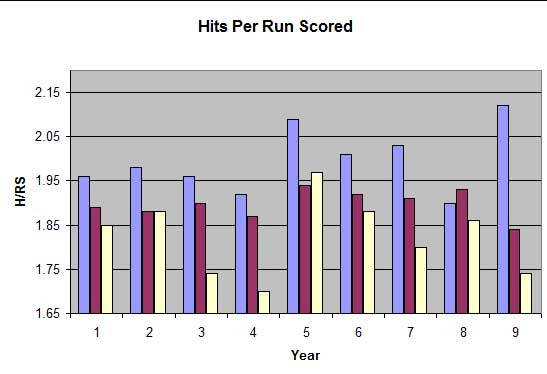 As you can clearly see, the Twins need more hits to score a run than the average AL team and the team that wins the pennant usually scored more runs with fewer hits than the average. And (other than 2008), the situation has gotten worse with Joe Vavra as the hitting coach. 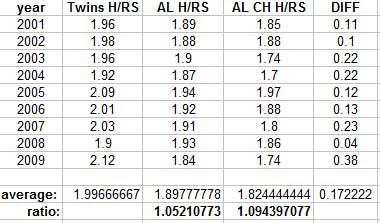 This is the table that is used to create the graph above. The columns are years, Twins Hits/Run, AL Average Hits/Run and AL Champion Hits/Run for every season (the last column is the difference of the Twins' squad from that of the AL Champion every season, but it is unimportant in the calculation)

The averages of all 10 seasons are underneath each column. The ratios of the Twins average to those of the other averages are noted under each column. Still, all these are ratios, fractions and small numbers; how do they translate in concrete terms.

Doing things the Twins' way, cost this team between 40 and 73 runs every season.

And if you calculate about 5 runs per win, this is costing between 8 and 15 wins a season.

That is concrete. And it is so concrete, that in other words I could have called this little piece: "Honey I've shrunk the offense"
Posted by thrylos98 at 2:51 PM 4 comments:

5 games behind; 5 things that should happen now

The Twins just finished the second and last game of their series in Baltimore, where they got swept, two to nothing. Despite Joe Mauer's return, this club is lacking energy and the ability to fight, from the manager down to the players. Last night's game should not have been played. It was. It was up to Gardenhire to do anything possible to delay it in order not to become official. He didn't. Instead he sat at the dug out watching batters swing away and pitchers pitch fast and throwing strikes. All he did was to whine afterward during the press conference about how unfair it was to play. Yesterday, Matt Tolbert was brought up from Rochester and Alexi Casilla was optioned to the Red Wings. This might help infuse some life to an apparently lifeless club, but here are 5 moves that should be made sooner than later:


I think that all these moves will energize these Twins. What do you think?
Posted by thrylos98 at 9:59 PM 6 comments:

A blog not to miss

I became away of a brand new blog, 'R Red Wings, which is a must for followers of the Twins' minor leagues. There is nothing like it as far as Red Wings' coverage and there are even videos of the games. Make sure you drop in.

I was going to write a post about the recent event, but got sidetracked. Will probably do it tomorrow or tonight if the game is called/delayed
Posted by thrylos98 at 6:03 PM No comments:

Pitching and the seventh-inning stretch

The seventh-inning stretch has been a long tradition in baseball, legendarily attributed to President Taft. During the middle of the 7th innings, the fans are standing up in the stands and signing take me out to the ball game.

However, the Twins pitchers this season, so far are creating a different version of the seventh inning stretch, practically begging to be taken out off the ball game.

Here is the Twins' opponent OPS at the different innings (10 is all extra innings): 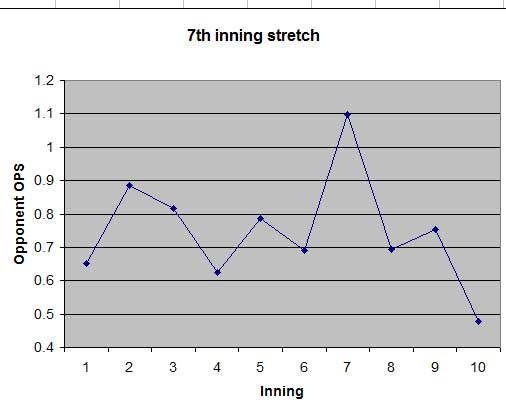 Just a bunch of thoughts about the minor leagues, after the end of the series with the Royals today. I will probably write more about the state of the big club tomorrow, but I strongly believe that the big club is as strong as its whole organization, so I will start with the minors


Update: The Twins re-activated Crain and send Jose Morales to the minors. Morales has been batting .238 OPS points higher than Redmond and .180 OPS points higher than Brian Buscher, but he is the one to go. This is not the way to win games. You have to put the best 25 man in the majors and at this point neither Redmond nor Buscher are part of the 25 best players in the organization. As I have indicated previously Morales should have stayed ahead of both Redmond and Buscher. And there is something else to consider: Morales is leading the team in batting average. His reward? A $350K pay cut. This in not how a top organization should reward its top performers.
Posted by thrylos98 at 6:06 PM 4 comments: