Here is an image of the top 3 prospects at the Eastern League in 2006.  Two of them will meet in the Twins' rotation in 2014 and there are rumors that the Twins are interested in singing the third one (a former Twin) as well.  Other familar names down that list:  Carlos Gomez, 8th and Alexi Casilla 15th.  Here it is: 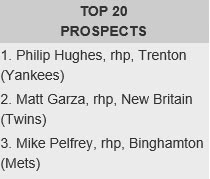 What the Twins are getting with Ricky Nolasco: A comparison with a former Twins' starter.

Last month, I examined in depth the re-signing of Mike Pelfrey to a two year contact by the Minnesota Twins, suggesting that he, indeed, can be a steal for the Twins for many reasons.   Today, I am looking at the biggest free agent spending from the Minnesota Twins ever, the signing of Ricky Nolasco to a 4 year, $49 million contact with an option of a 5th year, just before Thanksgiving.  In the near future, I will look at the signing of Phil Hughes, to complete the profiles of the 2 new, and one not so new, Twins' starting pitchers.

Rickey Nolasco by far is the most experienced pitcher in the Twins rotation and the Twins have him under contract for his age 31 through 34 seasons with the option covering his age 35 season.  How good is Ricky Nolasco?  The general sentiment, both from the main press and blogs covering the Twins has been that Nolasco is a mid-rotation type of starter, who can eat innings, and it is fairly durable (in a Carl Pavano way) but by no means he is a top of the rotation starter.

Let's dig a little deeper now that the dust has settled and the holiday period has passed.  Nolasco has been a darling in this space since about 5 years before the Twins signed him, because in his early years of pitching for the Marlins (look at this post from 11/2008, for example) he has been among elite company in pitching rankings.   His numbers have been up and down the past few seasons after the first seasons with the Marlins (which earn him 3 opening day starts for them,) thus it make sense to look a bit deeper.   And the way I will be looking is utilizing PE, xPE, FIP, xFIP and SIERA (please read this writeup for a primer about these measurements, what they do and the reasoning for their use).  I am also doing a couple more things.   I compare him to a particular Twins' pitcher, and using color coding, I am examining how both of their annual performances fit in a good rotation, using this key:

Here are the numbers: 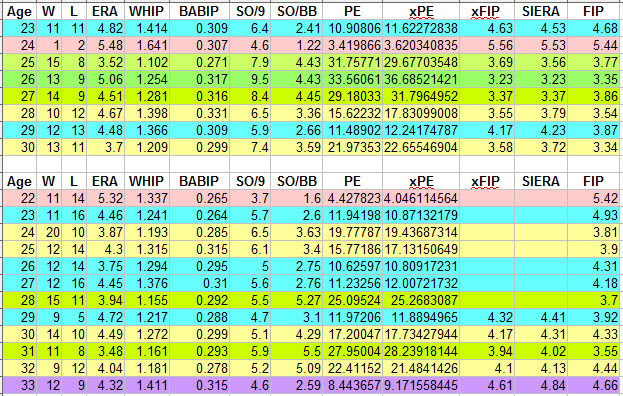 Nolasco's are on top, and Brad Radke's are on the bottom.   Because of the inability to calculate xFIP and SIERA in the early year's of Radke's career, I have added FIP as well.  However, as I show here, xFIP (and SIERA) correlate better with xPE than FIP, so the xPE comparisons are close to xFIP and SIERA comparisons.

Here is Nolasco's and Radke's FIP compared annually since season age 22 (just for Radke, Nolasco was not in the bigs then) : 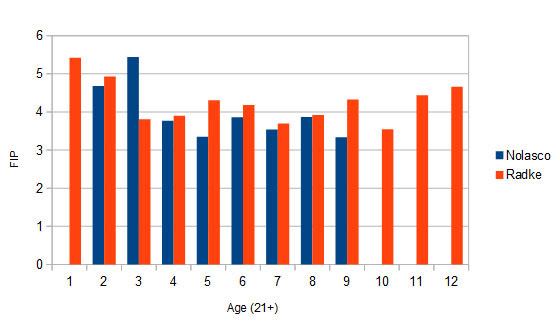 For the same age, other than age 24, Nolasco has had a very similar, but lower FIP than Radke in every season. and in the ages 26 and 30 seasons (that was 2013 for Nolasco), Nolasco's FIP was significantly lower than Radke's.

And here are their xPE comparisons (higher is better) over the same span: 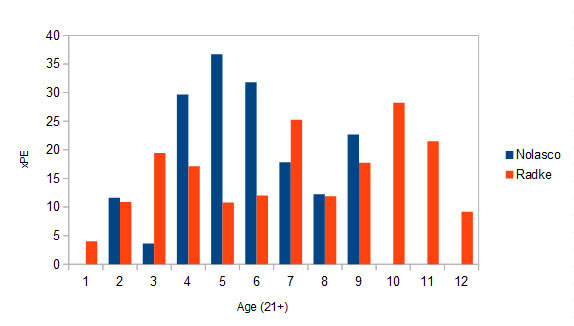 The xPE paints a bit of a more dramatic picture:  other than the ages 24 and 28 (this is a difference with FIP) season, Nolasco's pitching was much better than Radke's at the same ages.  However, there is a potential tale of caution, not obvious with the FIP chart:  Looking at both xPE and FIP, Radke's peak was his age 28-32 seasons with age 31 being his absolute best, before the shoulder issues kicked.   Nolasco's FIP is low enough in his age 30 season, but his xPE from his age 28 season one, has not quite reached his xPE peak of his career best (so far) at age 26.  The jump in his age 30 season is encouraging and hopefully indicates that the best is still to come and Nolasco is indeed still in his peak years, but the drop is something to keep in mind.

So what do the Twins have in Nolasco?   A pitcher who has pitcher close to, but better overall, than Brad Radke in a year by year comparison and who has been top of the rotation pitcher.  And based on the regard that the Twins' fanbase has for Brad Radke, an