Singed FA RHP Rickey Nolasco to a 4 year, 48 million contract with a $13 million team option for a 5th year ($1M buyout) which vests and turns into a player option depending on innings pitched (have to be 400 or more cumulative) in the last 2 years of contract - pending physical (11/27)


The current Twins' 40-man roster is here and contains 19 pitchers and 20 position players for a total of 39 spots; this does not include Ricky Nolasco, because his signing is not yet official 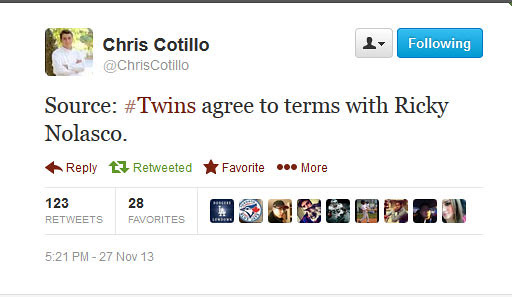 The Twins have not confirmed yet, but it looks like a done deal: 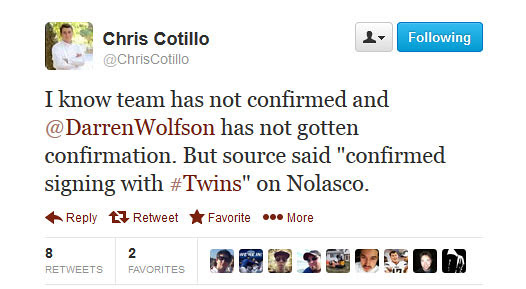 and even a Twins' player got into the action: 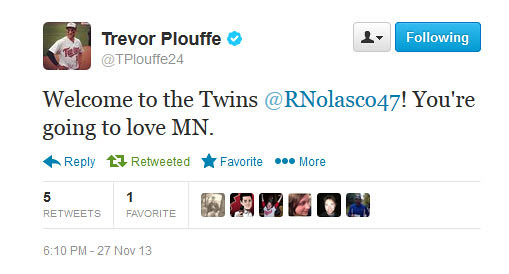 And Ricky confirms it himself by changing his Twitter page: 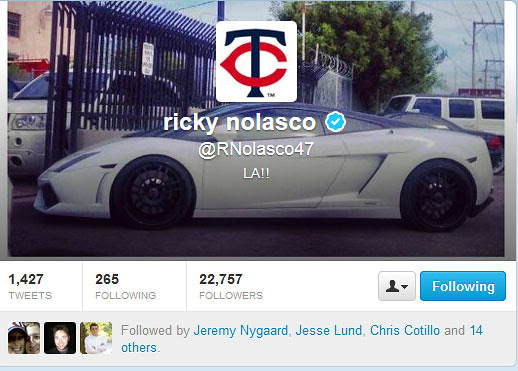 Wednesday Graphic in Technicolor: The Twins pitchers transformed into human rain delays in 2013

For most of the fans who watched the Minnesota Twins play in 2013, one thing was fairly obvious:  the pitchers were taking their sweet time on the mound between pitches.   I suspect that the collective gut feeling of the Twins' Territory is that it was bad, but how bad exactly was is?

How bad were the Twins?

Here is a graph indicating the seconds between pitches of all the Twins' pitchers who pitched more than 3 innings in 2013 (Sorry Tyler Robertson and Jamey Carroll), along with their individual numbers the previous 3 seasons (2010-2012).  At the end there is an average of the previous 3 seasons and the difference of 2013 from that average: 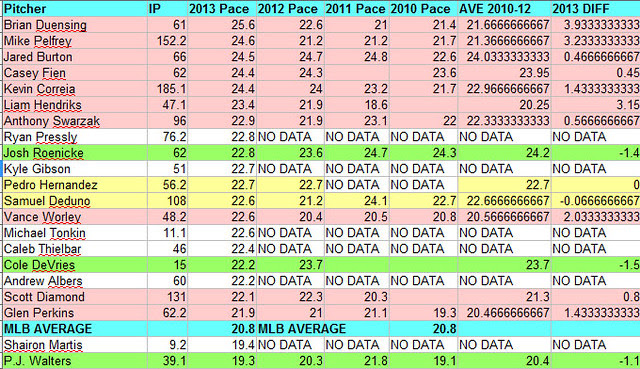 Five Twins pitchers, Brian Duensing, Mike Pelfrey, Jared Burton, Casey Fien and Kevin Correia were worse than the human rain delay.   And a sixth, Liam Hendriks, was at the ballpark.   The MLB average time between pitches is 20.8 seconds, the Twins took a total of 2 more seconds than that in average.   Only two players, Shairon Martis and PJ Walters pitched faster than the MLB average.

Also, of interest is that other than 3 players (Walters, Cole DeVries and Josh Roenicke; all former Twins now) who decreased their time between pitches in 2013 compared to their 3 previous season average and 2 players (Samuel Deduno and Pedron Hernandez, another former Twin) who remained constant, the rest increased their time between pitches this season.  Brian Duensing, Mike Pelfrey, Kevin Correia, Liam Hendriks, Glen Perkins and Vance Worley were the biggest culprits, with Dunsing's and Pelfrey's differentials at an astonishing 3-4 second rate.

Working fast and keeping your defense on their toes, has been an axiom as far as successful pitching goes.  Is this part of the Twins' woes in 2013?  Was the fact that Vance Worley took 2 more seconds between pitches this season and indicator of problems on the mount, which translated to below expectations?  The cause and effect are not certain here, but this is something that the Twins might want to address during the 2014 Spring Training.
Posted by thrylos98 at 11:38 AM No comments:

In the path that Brian Dozier blazed: A 2014 breakout candidate for the Twins

I think that it is fair to say that Brian Dozier's 2013 season (especially his power numbers) was not expected by many based on his fairly disappointing 2012 rookie season and his fairly flat minor league career.  But was there anything is his path through the minors that could have acted as a leading indicator potentially predicting his 2013 breakout season?


After he was drafted in the 8th round of the 2009 draft Dozier moved in a pretty typical path through the Twins organization for a 22 year old: Rookie leagues in 2009, split between A and high A in 2010 and split between high A and double AA, in his age 24 season.  That was the season when Dozier finally got it all together.  Here is a graph of his OPS and ISO throughout his career 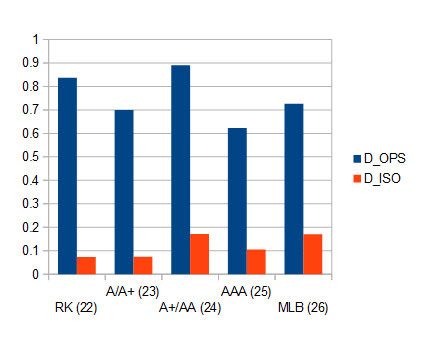 His age 24 season shows a noticeable increase in his OPS and, especially, his ISO that doubled from previous marks and was approaching the .200s .  His power (but not his OPS - which means that he still potentially has ways to go in the major league level) was very similar to that exhibited in his age 26 MLB season (2013).

Let's superimpose the above chart with a chart that shows the OPS and ISO numbers per season of another Twins' player and align them for age: 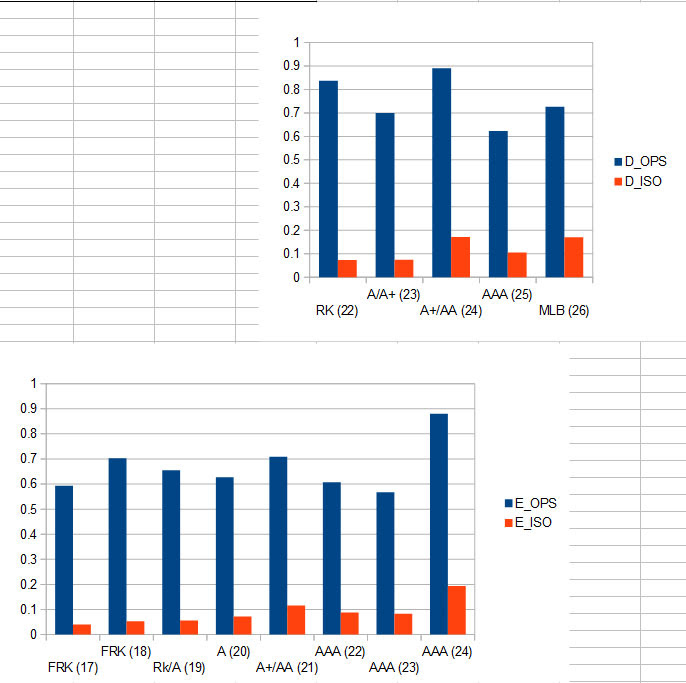 As you can see, this player has started his professional career earlier that Dozier did and had similar moderate success.  However, like Dozier, in his age 24 season (at AAA instead of Dozier's A/A+) had a major breakthrough with increases in OPS and ISO to close to all-star levels.  Actually at the same age, at a higher level of competition, his OPS and power numbers were better than Dozier's, which makes me believe that he will potentially have a season similar to Dozier's 2013 next season.  The player?

How about fielding which was another strong suit of Brian Dozier's ?

Here are the MLB career numbers for Dozier:

Both Dozier and Escobar do not make many errors. UZR/150 does not like Dozier and Escobar in 2B and 3B, but likes Escobar at SS.  Revized Zone Rating has Dozier near the MLB top at second base abd Escobar above average at both 2B and SS (but not that great at 3B).  Noted that Escobar's defense at SS is close to Florimon's as far as UZR/150 and RZR are concerned, but he is making fewer errors than Florimon.

Could Escobar be the Twins' SS of the near future and Escobar & Dozier the Twins double play combination for a while? Time will tell, but if Dozier's very similar career is an indicator, it looks like a very true possibility, starting with the 2014 season. 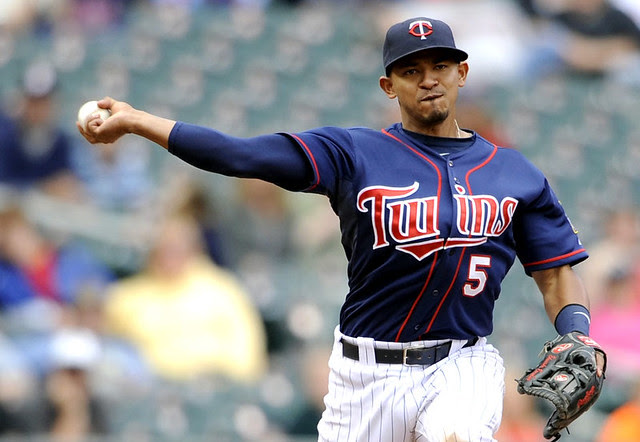