With the Twins' Spring Training about half a month old and eight official games in the books, it is about time that I start posting these dashboards again keeping track of how the players who are batting for positions are doing.   It might seem that Spring Training has been going on for a while, and it has because of the World Baseball Classic.  For comparison, last year the first Twins' game of Spring Training was March 3rd.

I have previously outlined the potential battles for position players as:

Also indicated that I consider the following players as locks (so I am not tracking them) :

and in the same piece, I indicated that the battles for pitchers were for one to three starting positions (depending on Scott Diamond's and Mike Pelfrey's health) and at least four bullpen spots; I consider as locks here (thus not tracked), in addition to the 2 aforementioned if healthy:


The ideas behind the mechanics of the dashboards to quantify Spring Training performance of the combatants in both the position player and pitching battles is explained in these two links.

For the pitchers, I quantify using  a measurement created by Bill James more than a decade ago called "Game Score".  It is calculated as follows:

The pitchers are broken down as "starters" and "relievers" but it is understandable that starters are candidates to make the teams as relievers.

For position players, I devised a similar metric that goes like this:

Without further ado (and no comments)  here is the Dashboard for the Twins' position players: 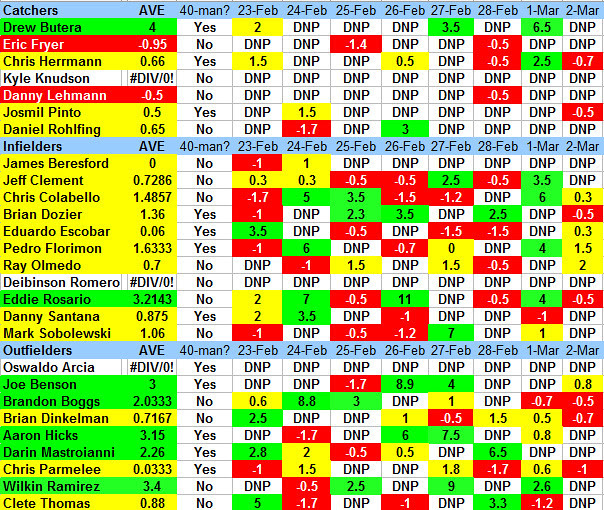 and here for the pitchers: 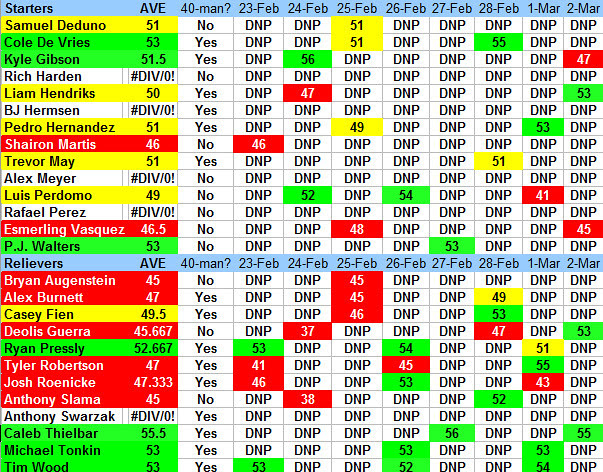 There is still many games to be played and these will be changing in pretty much daily basis.   I will publish the next installment in few days.