The Twins have way too many starting pitchers, but too few good enough.

The common wisdom among the Twins' fans and the media that cover the Minnesota Twins is that the Twins are on the prowl for adding starting pitching.  Unfortunately, the spendthrift ways of Terry Ryan have already resulted in a huge number of sub-par starting pitchers, the best of whom is Vance Worley or Scott Diamond (depends on who you ask) and they are tops number 3 starters in a competing team.  This massive mess of starting pitching is the result of Ryan's love for MiLB free agents.  Right now the Twins have enough older Starting Pitchers in the organization to fill an MLB, a AAA and a AA rotation (and then some), which guarantees stagnation of their prospects by being stuck at most at Fort Myers (and some of them pitched at AA last season.)

Here is the mess, analytically:

On the 40-man roster and projected on the 25-man roster:

On the 40-man roster potentially fighting for a spot for the Twins rotation:

This is 18.  Enough to Fill the MLB, AAA, AA rosters with a couple to spare. This means that unless some of the MiLB FAs are cut, the following will start at most at Fort Myers:

This is at least 2 rotations worth and sorry to the SPs who pitched at Beloit or Elizabethton last season:  Cedar Rapids and Etown will be your destination this season.   This indiscriminate collection of pitchers who are not good enough, in addition to not creating a competitive major league team, it destroys development of the best prospects.  Unfortunately Terry Ryan once again is going for rotation breadth vs. depth throughout the organization. 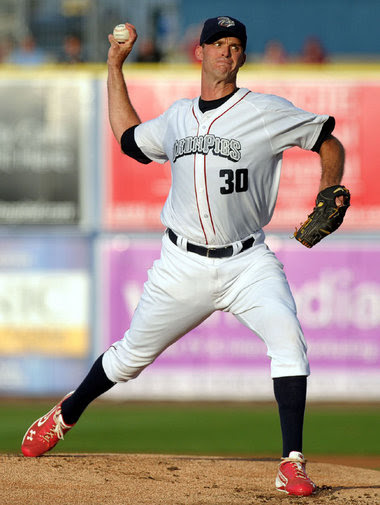 Who is Mark Sobolewski and what does he mean to the Twins?

The additions of three high quality arms (in the Denard Span and Ben Revere trades) and another one via the rule 5 draft, stole the spotlight of another Twins' acquisition, this of Minor League third baseman Mark Sobolewski previously in the Toronto Blue Jays' organization in the minor league portion of the Rule 5 draft.  The reason that he was able to be selected was that he was not protected in the Jays' AAA reserve list and, unlike the MLB rule 5 picks, he does not have to be with Rochester the whole season or be returned to his original club.  He will be a Twin.

I believe that this acquisition is more than organizational depth at 3B, which is needed, since the only pure third baseman in the upper levels of the organization is now Deibinson Romero who will probably start the season in Rochester.

A couple of interesting things about Sobolewski (btw, his first name is Robert; Mark is his middle name) : He replaced former Twin Danny Valencia as the starting third baseman at University Miami and he looks a lot like the former Twin with the bat, hitting 18 HRs for the AA New Hampsire Fisher Cats in less than 400 plate appearances, but is much better on the field.   He has above average range at third and makes all the routine plays, which was not Danny V's strength.

Sobo (his nickname), is a cancer survivor.  He is 25 years old, just like Romero who, also just like Romero, had a break through season in the Eastern league (AA) last season. Sobolewski's defense is slightly superior, while Romero has a better eye at the plate. I suspect that these 25 year olds will provide competition for Trevor Plouffe (something that Terry Ryan wants for some reason) at Spring Training and they will probably start the season in AAA Rochester. It is worth mentioning that both guys are pure third basement and they primarily played there other than a couple of games at second for Sabolewski and at first for Romero.

Sobolewski's acquisition is not like those of Matt Carson, JR Towles, Sean Burroughs and the like of the past season, since, unlike the aforementioned, he has not been a disappointment at the majors and he is just 25, ahead of his prime.

Here is a video of Sobolewski hitting a home run last season: