In the first part of this series, I suggested that the Twins trade Danny Santana, Mike Tonkin and Jake Reed to the Oakland Athletics for Ben Zorbrist and Tyler Clippard; and to promote Jorge Polanco as their starting shortstop.  In the second part of this series, I suggested that the Twins trade Tommy Milone and Jason Wheeler to the Phillies for C Carlos Ruiz and LHP Jake Diekman and move Trevor May back to their rotation.   With these 2 trades, they would address their deficiencies at Catcher and Shortstop positions and would add a RH and a LH set up pitcher.   They would also add post-season experience and one of the most versatile players in the game in Ben Zorbrist.  This third trade would be the cherry on the top, not only allowing them to improve both the pen and the rotation and add considerable bench help, but building for the future as well, and it is a blockbuster.   and addressing another elephant in the living room:  Lack of LH power.

I thought hard about that one, and it can help, but there is a catch:  Other than Oswaldo Arcia (and switch hitting Kennys Vargas)  The Twins do not have much left handed power, so:

Why would the Twins do it?

24 year old RHP Carter Capps (no relation to you know who) has the third fastest fastball in the majors averaging 98.1 mph, routinely reaching triple digits, leads the majors with 49.5% K%, has a miniscule 1.37 ERA (and even smaller 1.16 FIP and 1.07 xFIP,)  spots a 0.750 WHIP (with an  average .293 BABIP) and has probably the most devastating knuckle-slider in baseball.  Why would the Marlins give him away?  Well... they do not like him.  It might be the delivery.  It might be something else, but they do not like him.  And they do have AJ Ramos and Sam Dyson ahead of him; and maybe for a good reason.  But he is hot.  The hottest pitcher around.  The Twins should take advantage of that.  Raudel Lazo might be a relatively unknown, as he is a 26 year old who just got promoted to AA, but is a Cuban defector who just started to find himself, and on the mount could be Aroldis Chapman's little brother.  Giving up Eddie Rosario might hurt, but with Aaron Hicks finding himself, needing Arcia's left hand power badly, Byron Buxton up and coming and Max Kepler and Adam Brett Walker in the wings, Rosario is expandable.  And you have to give quality to get quality.  Lazo would likely play for Chattanooga in this scenario and would compete for a spot next season.  Oswaldo Arcia would get called up to take Rosario's spot.

Why would the Marlins do it?

They have a huge need of outfielders, with no OF prospects in the pipeline.  Rosario is versatile, will hit, can play all OF positions well and can run well and all they have to give are two players they do not count on for the long run.  Plus Eddie gets to play an hour away from home by plane.

Here is what the Twins' roster would look after these trades (newly acquired or promoted in italics) :

(*) Alternatively another pitcher (eg. Pressly) might occupy that spot.

Yesterday, in the first part of this series, I suggested that the Twins trade Danny Santana, Mike Tonkin and Jake Reed to the Oakland Athletics for Ben Zorbrist and Tyler Clippard; and to promote Jorge Polanco as their starting shortstop.   This will address the shortstop and right hand set up positions.  They Twins would need to address their Catcher deficiency and they need another lefty in the pen to complement Brian Duensing, who has been unhitable this month, and his season numbers been victimized by a .448 Target Field BABIP.   I do not believe that 27 year old Ryan O'Rourke with 18 innings pitched above AA, including his current stint with the Twins, is the answer to this position for a contender.   The Twins will solve that problem and the catcher problem in this trade.

Why would the Twins do it?

Carlos Ruiz on paper is a aging catcher who is overpaid (singed until 2016 with about $12.5 million left in his contract) and under producing (.227/.316/.303 with a 74 OPS+).  However, one needs to look closely at his production:  In High Leverage situations, he is  8/27 with a .296 Batting Average, 5 BB and 3 K.  He is hitting LHPs at a  .276/.392/.448 pace.  He is someone who thrives in competitive situations and someone who makes a team better.  Pitchers love to throw to him.  Defensively he is average, which is not something that can be said for the current Twins' starting catcher.  Jake Diekman, whom I am certain is an unknown to most Twins' fans, will be in his first year of arbitration next season and had some inconsistency and butted heads with the previous Phillies manager, enough to be demoted to the minors.  He will be arbitration eligible in 2016 for the first time.  He is 28.  So what is there to like?   His 96-98 mph fastball, coupled with one of the most devastating lefty change ups in the business.   The Phillies could see beyond his 5.19 ERA and the fact that he allowed 31% of the runners he inherited to score.  His 3.40 FIP, 27.4 K% and .394 BABIP indicate that he is a prime candidate for a change of scenery.  He does have closer stuff.   Giving away Tommy Milone, in addition to being an addition by subtraction, bringing the Twins' FIP leader, Trevor May, back to the rotation, is a cash balancing move.   He is making close to $3 million this season and he will be in the second season of arbitration next season.   Jason Wheeler is a 24 year old LHSP with a career 36-26, 3.60 ERA (3.56 FIP), 1.362 WHIP, 6.2 K/9 record in 96 minor league games, who occupies a 40 man roster spot for the Twins, and does not have much future in the organization, other that a long reliever or bottom of the rotation starter.


Why would the Phillies do it?

The Phillies are rebuilding and they are in full fledged SALE mode, with the upcoming change in Front Office leadership.  They will be saving enough money and getting a couple of young arms who they can potentially plug in their rotation right away and rely on them.  Milone's staff might work better in the National League.  Wheeler is a fastball, slider, changeup pitcher, with fastball being his best pitch and runs in the low 90s but with a lot of controllable movement.   If one of his secondary pitches improves, he can actually be a serviceable starter or a bullpen piece, for a system that is really depleted of prospects.

A couple days after the All Star game, the Twins find themselves nine games above .500, and in the midst of a competing season.   The fact that the Twins are competing, might be a surprise to some, but from what I have seen in Spring Training, this team had all the making of a competing team, and I even compared it to the 1987 team.   Like the 1987 team, which would not have won if not addressing them, the 2015 Twins have some glaring weaknesses that they would need to fix.  These weakness are at their Bullpen, Catcher, Shortstop and the Power department.   I will be proposing three trades that the Twins would need to make right now to not only ensure the continuation of competitiveness, but to propel themselves to the next level.

Why would the Twins do it:

Tyler Clippard, even though he is not a top closer any more, will be a great improvement over the likes of Casey Fien and Blair Boyer in solidifying the RH setup spot in the pen.  Zorbrist brings a glove that plays in every position in the diamond and will solidify the utility role shared by the Eduardos (Escobar and Nunez.)   The Twins should call up their number 2 prospect (after they called up number 1 and number 3,) Jorge Polanco, who is the future and the present of the team as the starter at Shortstop.  The 21 year old has been hitting .300/.340/.399 between Chattanooga and Rochester and his glove is at least as good as Santana's at this point.   Zorbrists and Clippard are 30-something, but are free agents after this season, so the financial commitment is not going to impede any future teams.  Clippard can potentially be extended, if his performance dictates it.  They are not loosing that much in Santana, Tonkin and Reed.  Santana, despite his comet-like 2014, still profiles as a utility player and needs work on both sides on the plate,  Tonkin had plenty of opportunities to prove himself in the bigs, many more that relievers with better minor league record like Anthony Slama, and has failed.   Still has a 95 mph fastball than an organization will find usefull.  Jake Reed has a very good pro career so far, but an abysmal 2015 and the Twins' draft has at least 4 RHRP in the Twins' minors ( Burdi, Chargois, Peterson, Achter - in no order) ahead of him, thus making him expandable.   It will also allow Jorge Polanco to join Sano and Buxton, making the future the present. Yes, the Twins are losing some talent, but a. they need to give value to get value and b. have better talent in those positions.

Why would the Athletics do it:

Other than the prorated $16 million reasons between the two players (about $7.5 M in salary relief), for a team that is not going anywhere, they are getter 3 young players who do have potential.  Santana's 2014 season might have not been as much a mirage as I think it was, and two young arms with high 90s heat and record of success, are more than something to consider.

This is probably the definition of a win-win trade. 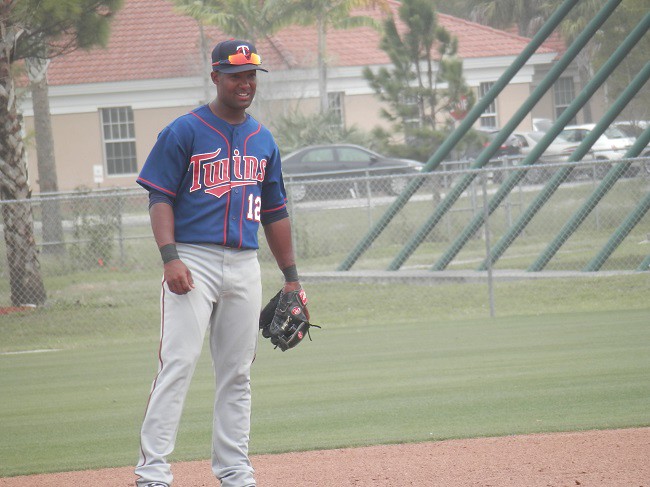