What did I see from Eduardo Nunez last weekend

As I indicated earlier, in addition to seeing Alex Meyer, one of my goals last weekend when I attended the Red Wings' last 3 games at the Lehigh Valley IronPigs, was to have a good look at the newest Twins' player Eduardo Nunez.  Nunez, once the heir apparent to Derek Jeter and a Yankees top prospect, was traded by those Yankees to the Twins for Miguel Sulbaran (quick scouting report from this Spring Training here.)   Even though I am deeply enshrined as an Eduardo Escobar supporter for the Twins' starting Shortstop job,  any improvement over Pedro Florimon, is more than welcome, so I was extremely intrigued at seeing Nunez on the field and at the plate.

In the three games I saw, Nunez played Shortstop, DH, and Right Field.  There has been a reputation built around Nunez indicating that his defense is poor.  Looking at the various measurements, which are all affected by the smallish sample size, UZR, fangraphs "Defense" and RZR does not like him much, but it also looks like he made 50 plays out of the zone at shortstop in 152 games, so color me intrigued.  Here is what I saw:

In his game as a shortstop he handled several balls and made good accurate throws to first base.  Adjusts well on different batters and is pretty aware.  On a particular grounder he juggled the ball, but still initiated a double play, so that did not hurt.  As a right fielder he took good routes to the ball, had to dig a ball from the corner and did it exceptionally well and made strong throws to the correct cut off man.  On one occasion he tried to barehand a ground ball and he overran it by a foot, but recovered.  All in all he looks like an average fielder to me out there, if a bit eager to make a play.   I am not sure about where the reputation of a bad fielder comes from (maybe from WFAN 660 callers?) but for someone like me who have seen the Twins play Buscher, Nishioka, Harris, Delmon Young, and still play Plouffe and Willingham on the field, I think that Nunez will be an improvement over all of them.

As far as his bat goes, I was really impressed by the quality of his plate appearances.  You can see a video of a plate appearance here.  He is tied for the lead in Home Runs for the Red Wings with 3 and he has not played that much.  His ability to adjust and put the ball in play is excellent.  Something that the Twins can really use in the bottom of their lineup.  In addition to the video example mentioned above,  here is a sequence of photos that shows what I described:

Pitch 1:  Slider low and outside, swing and miss: 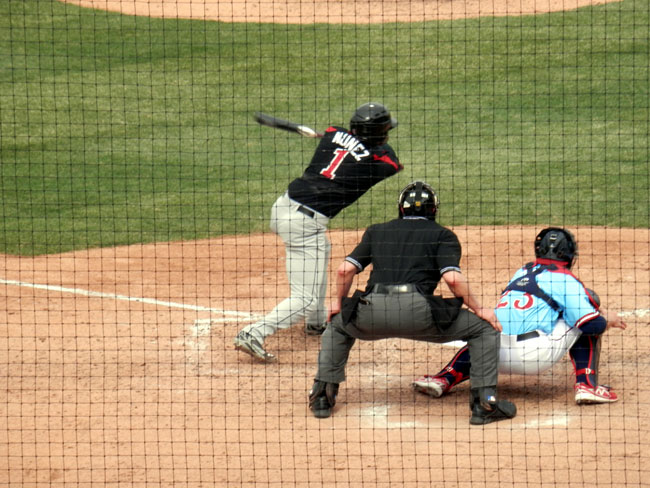 Pitch 2: Same pitch. Moves inside a more, times it better and fouls it: 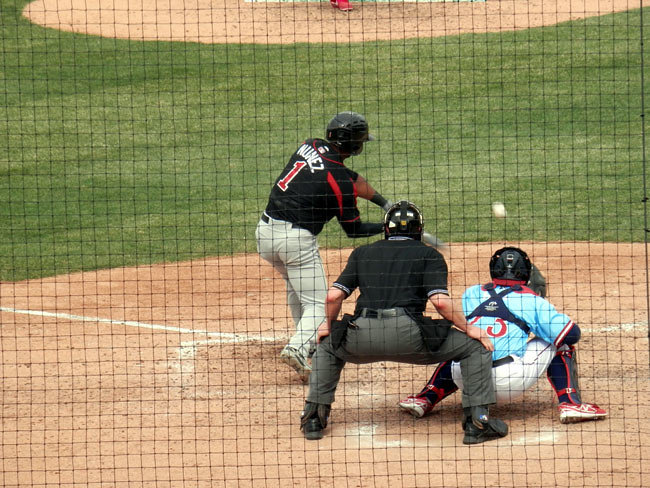 Pitch 3: Same pitch. He gets the fat piece of the bat and turns it in for a double: 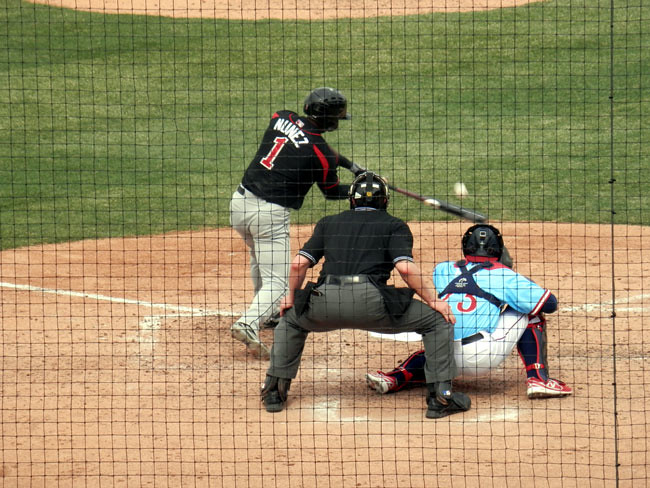 I cannot remember how many times I have seen Twins' hitters in the majors failing to do this.

All in all, I think that Eduardo Nunez will be an asset for the Twins and part of the solution in the future. 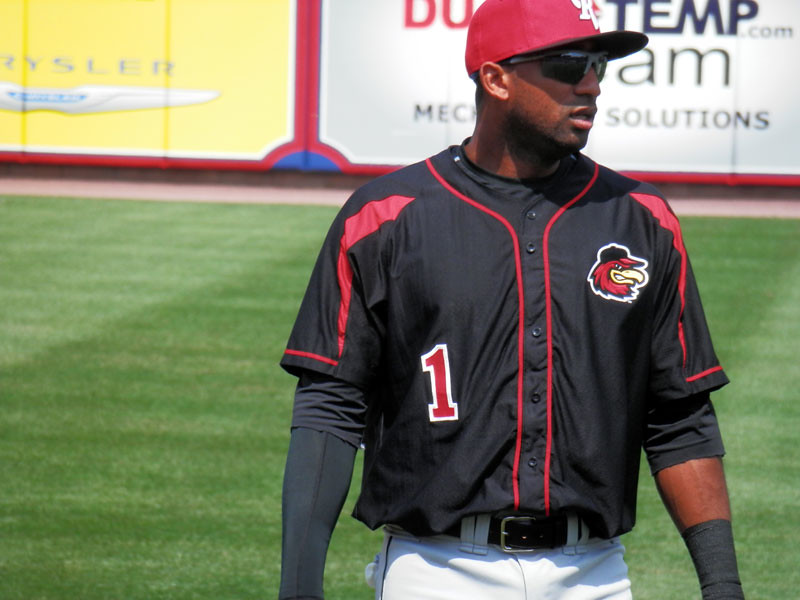 This is not all I have to say about Eduardo Nunez this weekend, but I decided to put it up since I have it now.   The one thing that Nunez impressed me with (and I have to admit that this video is not the best example over the last 3 games I saw - but his only PA I took a video of) is his ability to adjust to pitches, and to make contact.  This is really important in a team like the Twins that has a lot of strikeout prone players.

I had the opportunity to watch the Rochester Red Wings' last 3 games (the double header last night and this afternoon's game) in my back yard against the Lehigh Valley IronPigs over the weekend.  My list of must dos were to see whether Alex Meyer was as good as he was this Spring, in real game situations and to see what Eduardo Nunez was all about.   Happily to say, that I have done that and more and I am ready to share.

Speaking about sharing, on the first leg of the doubleheader last night, the IronPigs wore their new bacon uniforms, so here is a shot of them. 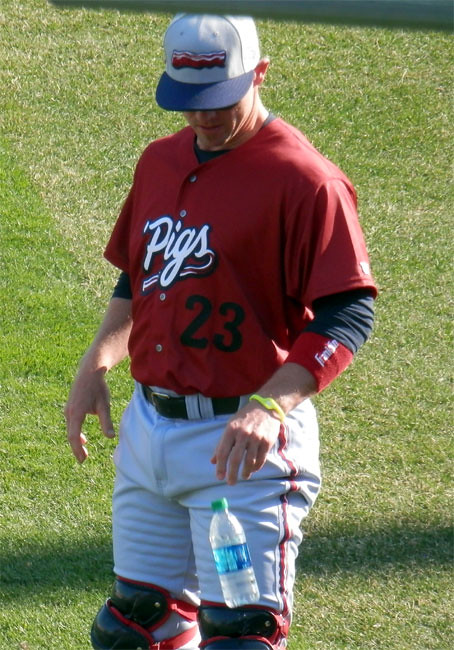 If you look closely, the bacon strip on the hat spells "IronPigs" in a Salvador Dali-like script. 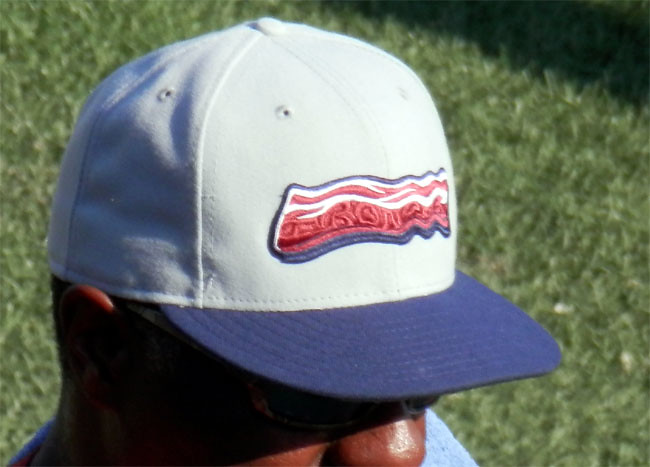 Back to the Twins: Little known fact, but Alex Meyer is doing a variety of resistance exercises on his shoulder for a good 20 minutes before he goes to the pen to warm up. 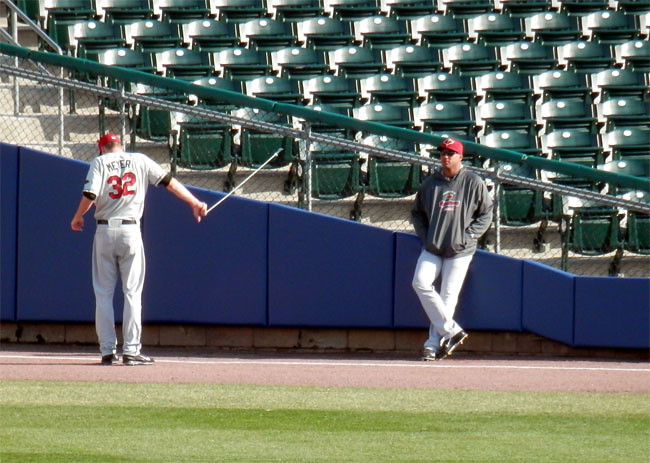 I guess that loosens the shoulder 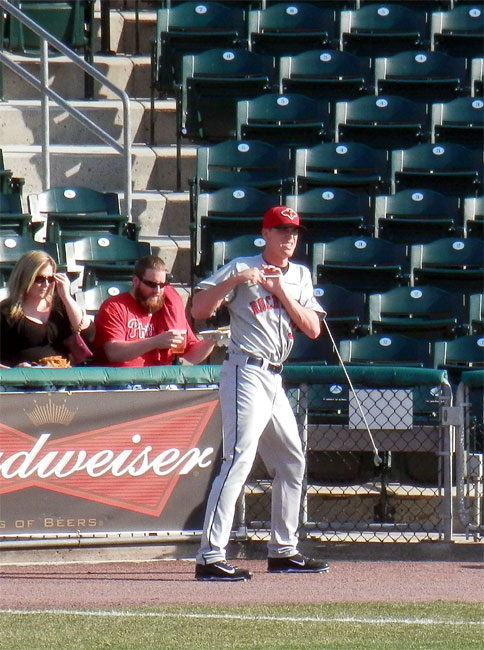 In this game Meyer showed why he is the Twins' number 3 overall prospect and the Twins' top prospect who is playing the game right now.  His Fastball sat all night between 94 and 96 mph, touching as high as 97 and as low as 92 on occasion, and was a ball that he threw all over the zone.  Inside and out and up and down.  If being a batter trying to catch up to a 97 mph inside FB after swinging at a 94 mph outside FB was not enough, Meyer's best pitch is not his fastball that has a wicked downward motion and it is very hard to lift.  Arguably, his Fastball is his third best pitch.  He is using his FB to set up a knee buckling high 70s curve (his best pitch by far) and a low to mid 80s changeup, with a tailing motion.  These two are his out pitches.  He also has a slurvy slider in mid to upper 80s, which is an average pitch at this point.  So we are talking about a repertoire of 3 plus pitches (with at least the curve being plus plus) and an average and improving pitch.   All a batter can do at this point is to put the bat down in the zone and pray that contact is made and there is a bloop or an error on the other end.  And that was what happened yesterday.   A couple of bloops, a couple of errors by Deibinson Romero and a couple of soft singles down the middle amidst a bunch of broken bats, soft grounders and strikeouts.

Here are pictorials on the velocities that Meyer operates within (Radar readings upper right corner) : 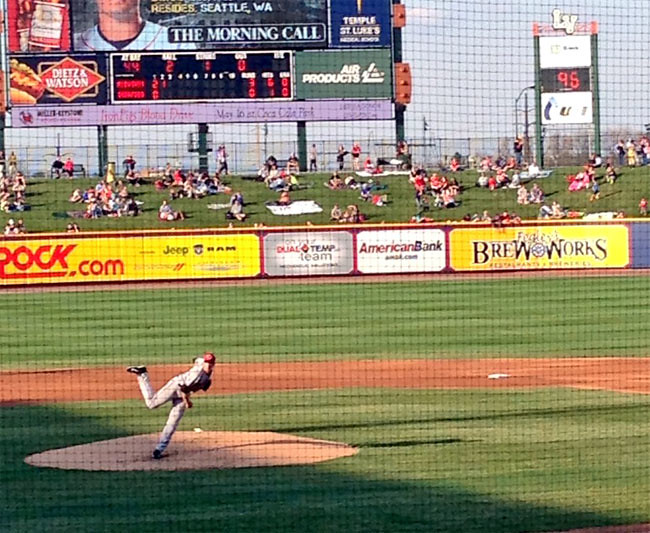 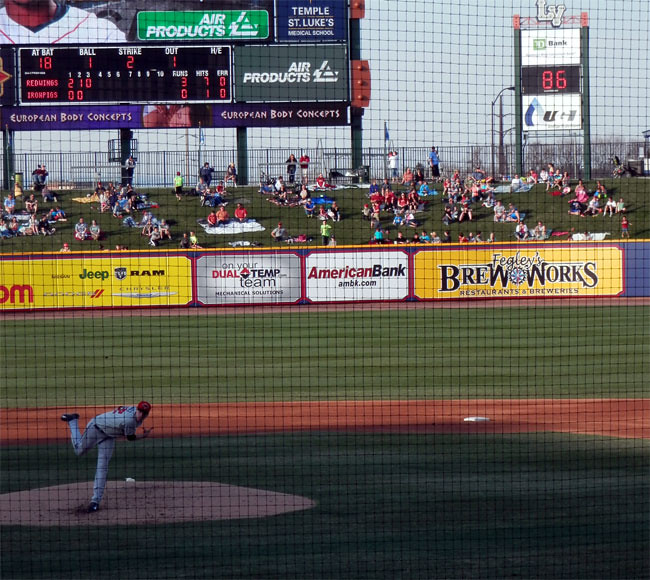 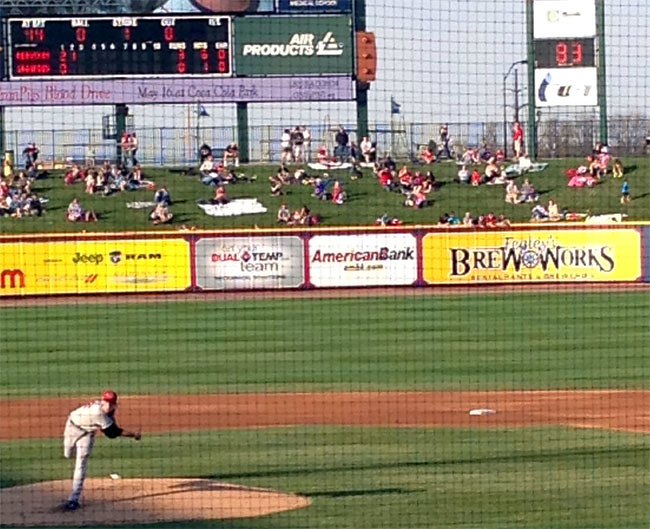 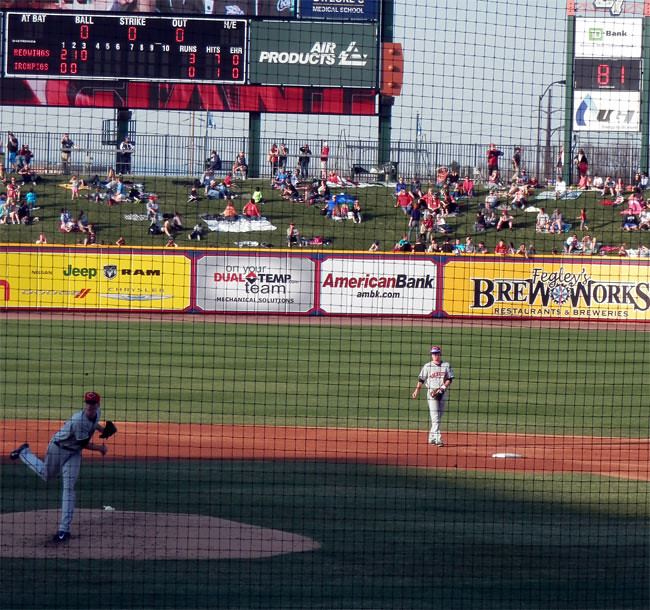 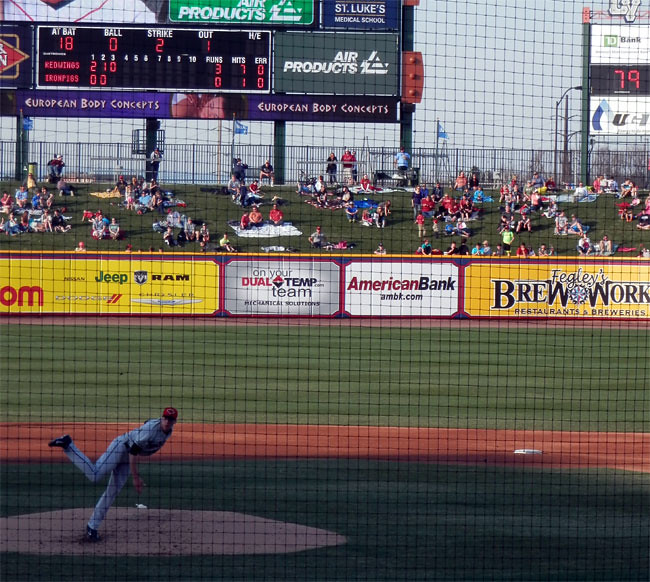 Those were: Fastball, Slider, Change up, Curve, Curve.   And his fastest Fastball clocked at 97, while his slowest curveball at 78.   This is a good 20 mph or so range and he held that range throughout the game.

By far, he has the best stuff in the Twins' organization and definitely top of the rotation potential.

Next: Eduardo Nunez.
Posted by thrylos98 at 6:51 PM No comments: