One trade the Twins should make right now

There have been a lot of official and unofficial "blue prints" based on what the Twins should be doing this off-season; surprisingly they are all centered around starting pitching.  Even the Twins' brass has admitted that they probably need at least 2-3 new starting pitchers in their rotation in order to be competitive, since the only pitcher who is guaranteed a spot is Scott Diamond, who despite his great success last season compared to the rest of the Twins' rotation members, based on his numbers from last season, is a number 3 starter in an average team and a number 4 starter in a competitive team at best.

So the Twins need pitching.  And lots of it.  And they can only get so many starters better than Scott Diamond in free agency, so they would need to trade.  But in order to be competitive, they should not disrupt their core.  They do have too many centerfielders in the majors right now, and they can safely trade Denard Span (the older one who makes the most money and probably has the largest trade value of the three).  They can potentially trade Justin Morneau, because Chris Parmelee has put similar numbers in the majors (as far as WAR is concerned) and would be an adequate replacement, but other that the likes of Jamey Carroll (who is not a core player).  The Twins cannot trade any other starting position players without disrupting the competitiveness of the team.   The Twins will not trade any of their top prospects (and at this point, this is a superb approach).  Morneau and/or Span can probably bring a decent starting pitcher in return.   Maybe they can sign another one (but I do not have confidence in the team who re-signed Carl Pavano and Matt Capps for what they re-signed them for or the general manager who likes to bottom feed with the likes of Jason Marquis, Livan Hernandez, Ramon Ortiz, Sidney Ponson etc, to sign any decent free agents)

Rock and a Hard Place?  Well, it gets harder...  There have been many season ticket cancellations and reductions based on the fact that the Twins finished with 99 and 96 losses the last 2 seasons.  So the need to do something to a. get starting pitching better than Scott Diamond and b. put some bottoms on the seats (or the eating and drinking establishments) of Target Field.

What should they do?  Make a trade that is a win-win for both teams and will guarantee an increase in attendance.  But:  It will require thinking outside the box.  Here is the trade:

Allow the New York Mets to pick any 2 pitchers from the Twins' 40-man roster who pitched for the MLB team last season and not named Scott Diamond, Glenn Perkins, Jared Burton, Brian Duensing or Liam Hendriks and any middle infielder of the ones who played with the Twins last season not named Brian Dozier for $12.5 million and Johan Santana.

This would would be something like Cole DeVries plus Alex Burnett plus Pedro Florimon for a year of Johan Santana at $12 million and an option that the Twins will not pick up.

Johan pitched 117 innings last season with a 8.54 K/9, 2.85 K/BB an 1.33 WHIP and a  4.02 xFIP in a pretty much rehab situation.  This season he will be at full force and he is just 34.  BTW, that 8.5 K/9 is his highest in his Mets' career.  There is another intangible:  Johan will be reunited with Bobby Cuellar, the man who taught him the change up and has been somewhat of a father figure for him.  So Santana will be better than Diamond, will come at a price less than half for what the Twins paid for Pavano and Capps and Marquis last season and is guaranteed to put butts on the seats and bar stools of Target Field.  So it is a no-brainer for the Twins, esp since they will practically give nothing in return.

Would the Mets do it?  In a heartbeat and in a New York minute.  Why?  For the same reason they let Jason Bay go:  They need up front money to extent David Wright and they know they are not contending next season, so a season of Santana means less to them than the $12 million they will save and some of the MLB-ready players they will get in return.

Will it happen?  I am not sure that the Twins' brass can think that much outside the box.

Should it happen?  What do YOU think? 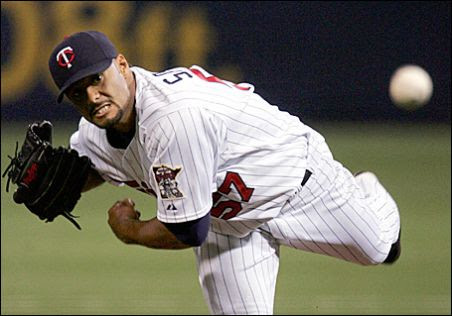