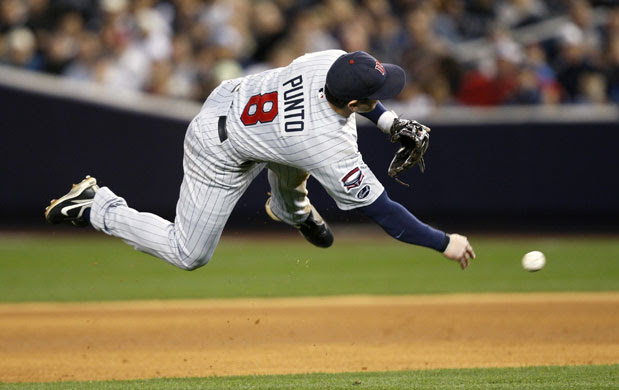 Newmie will probably get (s)elected into the Twins' Hall of Fame, Punto is really on his footsteps (minus a couple of rings). Give him the rings and he will be in. Don't like the way he is playing or the fact that he starts? Don't blame him, blame the Manager of the Millennium
Posted by thrylos98 at 1:28 AM 2 comments:

Is the 2010 the best team the Twins had? Part I: position players

This is my 13th year on the beat. This is the best team the Twins have had going into spring training.

I believe that it is an astute observation that the 2010 Twins are very likely the best team the Twins had the last 13 years; however, this does not say much because most of the Twins' teams from 1997 on, when they were competing, they were competing more because of guts and intangibles rather because of the power of the team 'on paper'.

I am starting a two-series analysis to see how does the 2010 team rank (on paper) compared to probably the greatest comparable Twins' team, the 1991 World Champions. I know that statistically the 1965 team that lost the World series to the LA Dodgers was the best Twins team; however, baseball changed so much between 1965 and 2010, and I think that an 'on paper' comparison, might not be very meaningful.

Today I am comparing the position players. I am using actual 1991 statistics for the 1991 and either 2009 or career statistics (in one case) for the 2010 team. Part II will be the pitching with the same parameters.

3B. Mike Pagliarulo (.279/.332/.384, 91 OPS+) vs Brendan Harris (.261/.310/.362, 77 OPS+). Pagliarulo and Harris are very similar players, but Pagliarulo has a slight edge in this matchup. It will be interesting to see how Harris will produce as an everyday player and whether someone like Valencia or Hughes might emerge as the starting third baseman for the 2010 Twins. Nick Punto is also an option here as a starter. Anvantage: 1991 (slight)

DH. Chili Davis (.277/.385/.507, 141 OPS+) vs Jason Kubel (.300/.369/.539, 136 OPS+). Chili Davis, the (then) newly acquired switch-hitting designated hitter was absolutely the single difference maker with the bat as far as the 1991 squad went. That said, last season, Jason Kuber, who at 28 will just be entering his prime and be yet another year removed from knee surgery, surpassed all Davis' numbers other than his OBP. Kubel is poised for yet another great season, however more consistency is needed against LHP and there are not many options on the Twins' bench for right handed batters to serve as occasional DHs. Advantage: 1991


Bench
The Twins played with a 5 man bench in 1991 and will probably use a 4-man bench in 2010, so I am making a slight adjustment in the comparison

1. Gene Larkin (.286/.361/.373) and Randy Bush (.303/.401/.485; average for both 115 OPS+) vs Jim Thome (.249/.366/.481, 118 OPS+). Gene Larkin was used as a PH and to spell Kent Hrbek on first base against some left handed pitchers, where Randy Bush was playing as a right fielder against some RHP and used as a DH and PH. Jim Thome, the only bonna fide hall of famer, from the 2010 Twins (might be more, but they still needs some seasons under their belts) projects to be used as a pinch hitter, a designated hitter against RHP (when Kubel, presumably assumes a corner outfield position) and see occasional duty as a first baseman. Thome will not hit for average, is on the sunset of his career, but likely will equal the production of the Larkin/Bush duo. Advantage: even

3. Scott Leuis (.286/.378/.417, 116 OPS+) vs Alexi Casilla (.202/.280/.259, 44 OPS+). Leuis was used a third baseman against some RHP instead of Mike Pagliarulo. Alexi Casilla (if he makes the squad, but he is the only one without options) will project to be used as a pinch runner and late inning replacement (in a scenario when Nick Punto is starting, Jim Thome pinch hits for him, reaches base and Casilla runs for Thome) with occasional starts at second base. Alexi is an enigma and the personification of inconsistency. Advantage: 1991