How Bad was Mark Wegner's Strike Zone in Twins vs Red Sox?

With the naked eye and the Fox TV camera's that assessed the strike zone in today's Twins- Red Sox game, it was obvious that Mark Wegner had some curious ball strike calls and several players reacted to them (albeit in a civil manner). How bad was his strike zone?

Here are the Pitch Fx data from Brooksbaseball.com. Green is a called ball and Red is a called strike. Squares represent pitches thrown by Red Sox pitchers and triangle those thrown by Twins pitchers: 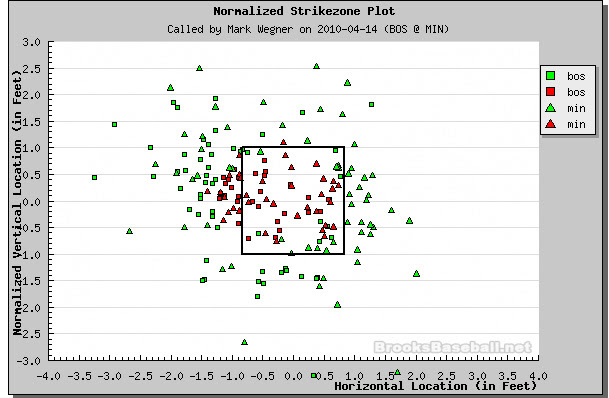 All in all it was a bad strike zone, but consistently bad for both teams. From a RHB vantage point, outside balls were called strikes and inside strikes were called balls.

Here is the team by team break down:

Regardless the quality of the strike zone, it was consistent and pitchers and catchers should have adjusted accordingly. So this one was not won or lost by the umpires.
Posted by thrylos98 at 6:42 PM No comments: