Here is the schedule:

So about 100 days for Catchers and Pitchers reporting....

Spring is about here. 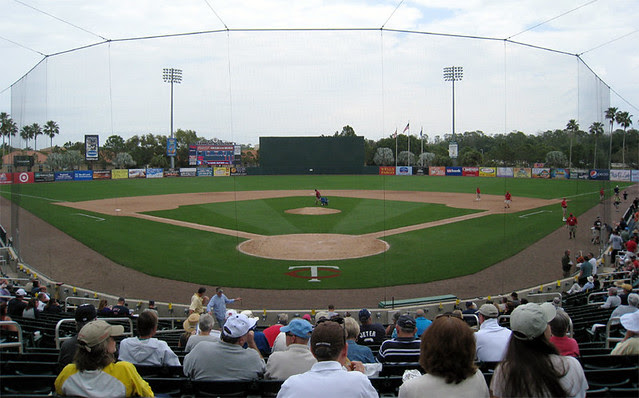 Without further ado, here is the list of the 25 former Twins' players who are minor league free agents with other teams, by team: 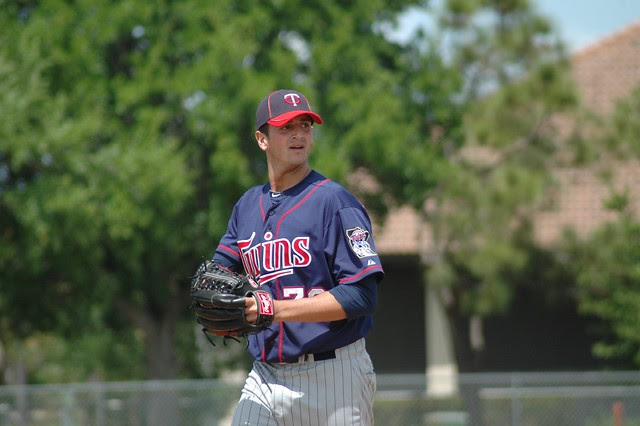 It has been officially the Hot Stove season, or the off-season, and here is a list of important dates to keep in mind, including the annual award announcements that take place next week:

November 10
Outright waivers secured on or after September 1 expire at 5 p.m. ET

November 12
BBWAA Managers of the Year

March 26
Last day to request unconditional release waivers on a player without
having to pay the full salary for the 2014 season.

It is not a secret, that the biggest problem the Minnesota Twins had in the past few woeful season, as far as players are concerned, is the lack of a reliable rotation.   While a lot of fans are looking at 2015 or 2016 as the potential contenting point for the Twins, when Miguel Sano and Byron Buxton "come to age", the dirty secret is that there are not (other than Alex Meyer and potentially Kyle Gibson above A level) any sure bets for top of the rotation pitchers in the system, which, almost certainly would guarantee mediocrity at best for the middle of this decade.

This off-season the Twins have an opportunity to remediate this via free agency and, in addition to 2015 and beyond, be competitive in 2014.  In order to do so, the Twins would need to sign at least 3 pitchers better than Kevin Correia who can be a place holder for Alex Meyer, in his last contract year and with Kyle Gibson would be the 2 remaining parts of the Twins' rotation in 2014.   Who should those three new pitchers be?   What would it take to sign them?    Remember, we are not looking only for 2014, but we are looking beyond.  And we are looking for numbers one, two and three in the Twins' rotation, allowing Gibson to be number four and Correia number five, which would result in a competitive rotation.   Potentially one of these positions could come internally:  Alex Meyer might be one out of Spring Training;  I have not given up on Vance Worley because of an awful injury, out-of-shapeness and bad luck (BABIP) induced, age 25 season;  and nobody knows whether Samuel Deduno might take the next step.

What characteristics those free agents should have?

If you look at the measurable characteristics the top pitchers have, two jump out right away, and these 2 happen to be the exact ones the Twins' rotation has been lacking:

a. Hard throwing.   Average Fastball velocity in MLB is 92 mph, including relievers
b. Missing bats.   Average K/9 is around 7 in the majors, so we are looking for top of the rotation players with K/9 above 8.


And because of the long-term vision (we are looking for players who can get 3+1 or 4+1 contacts and would be with the team for the biggest part of the decade when Sano and Buxton come to age) the Twins need to look at pitchers who would at mostly be 31 years old in 2014, so they do not pay for a pitcher's declining seasons.   One can argue that an older pitcher can be signed in an one or two year contract as a place holder for someone like Kohl Steward, which is a valid argument, but at this point it does not guarantee competitiveness, since Kohl Steward is not a sure bet now.

Here are the 3 criteria (all measurable) the Twins should look for in a free agent:

Here is a list of all 2014 free agent starting pitchers, from MLB trade rumors, alphabetically and with 2014 season ages in parenthesis:

Trimming the list by age, and listing K/9 and average FB velocity for both 2012 and 2013, disqualifying pitchers who (because we are looking mostly for "sure bets".  Reclamation projects and bargains could fit for one of these positions, but are out of scope for this exercise.)  :

we have this list (with K/9 and FB velocity fitting the criteria indicated in green, if fit complete or in yellow if fit when rounded up to no decimals) : 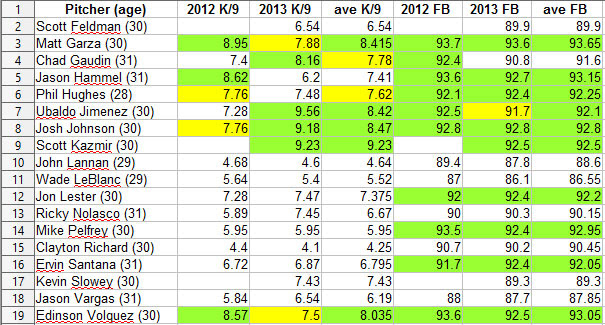 Matt Garza, RHP, 30.  Difficult to see a Garza reunion with Ron Gardenhire and Rick Anderson still on the Twins' staff.  Documented personality conflicts when with the Twins

Ubaldo Jimenez, RHP, 30. Received a qualifying offer, which means the Twins will have to surrender their second round pick to sign him.  Price will be high because of monster second half.

Josh Johnson, RHP, 30.  No qualifying offers.  Health and performance consideration (if one looks at W-L and ERA; but solid xFIP and peripherals) will drop the price

Scott Kazmir, LHP, 30.  The only lefty in the list.  No qualifying offer.  Great year suggests that recovered from injury nicely

Edinson Volquez, RHP, 30 .  No qualifying offer.  Very quietly made it to the list.  A sleeper, potentially low cost signing

Phil Hughes (28)  He is intriguing; close with the K/9.  Still in early prime.  Can be the one from this group to target

Jon Lester (30) Will likely stay with the Red Sox.  Expensive.  Lots of people think of him as an "A list" pitcher but is not.

Mike Pelfrey (30)  Interesting to see him in the list, but his K/9 is not in the ball park.  Can he get his K/9 up?  Great fit in the Twins' club house.  Should the Twins take another flier with Pelfrey another year away from TJ surgery?

Ervin Santana (31) Expensive.  Lots of people think of him as an "A list" pitcher but is not.   Received a qualifying offer. Stay away for the money.  More expensive that all the pitchers in the A list, other than Jimenez.

Gaudin was a reliever in 2012 when he met the criteria.  Nolasco and Vargas are thought to belong in the "A list" potentially.  They do not.

Who are the three starting pitchers the Minnesota Twins should sign in 2013, in order to be competitive in 2014 and beyond?  They are:

Can they sign all three?  The short answer is "yes", but I will examine the Twins' budget in another post...