Like most teams the Minnesota Twins will be announcing the first cuts of the major league Spring Training camp very soon.  Who will those players be?

One group of players who gets cut first are players on the 40-man roster who do not have much likelihood to make the team and were added on the roster for protection's sake.   I think that Logan Darnell, Max Kepler, Jorge Polanco and Kennys Vargas  will be the four casualties from this category.  I think that Trevor May is on the bubble and might be in the first cuts list as well, because he has been pitching primarily in relief (and not that great) and will need to be stretched as a starter and it might be good timing with the minor league games starting the coming Monday.  Edgar Ibarra, who has yet to play because of Hepatitis B, is another serious candidate to go to the minor league camp to recuperate.

I think that the Twins will want to have a longer look on Danny Santana, Kris Johnson (they are performing really well and with Pedro Florimon yet to play because of his apendectomy and the fifth starter job wide open, there might be real opportunities).   I also suspect that the Twins would want a longer look on Brooks Raley because he just has not been around much and they might need to make a decision on his 40-man roster spot.

There is not much pressure to cut non-roster invitees (because they do not have to be in the Major League DL, receive ML pay and have their clocks ticking, if there is an injury during camp,) but I suspect that some will be cut as well.   Sean Gilmartin would be a good candidate from this group because of the opportunity to get stretched in Minor League games.  Also with the reduction in pitchers, the Twins are likely to demote a catcher or two, because they do not need them, with Stuart Turner and Matt Koch being the most likely.  Even though Jason Kubel and Jason Bartlett are having a hard time hitting the ball, I suspect that the Twins will give them every opportunity to succeed in Spring Training.  This might not be the case for Chris Rahl who sees fellow non-roster outfielder invitees Jermaine Mitchell, Darin Mastroianni and Wilkin Ramirez performing better than him.

Here are the latest battle dashboards updated for today's game (and you can find all of the 2014 Spring Training dashboards here) : 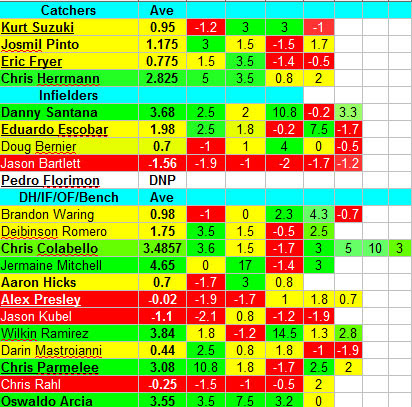 And for the Twins' pitchers: 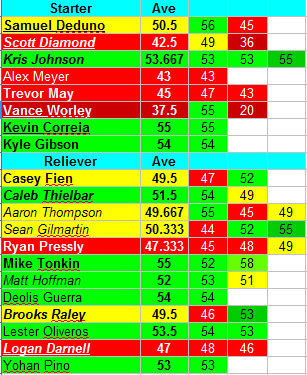 The Twins lost to the Baltimore Orioles' travel squad yesterday in a pretty bad way (11-5.)  Here are the Spring Training Battle Dashboards updated after yesterday's game: 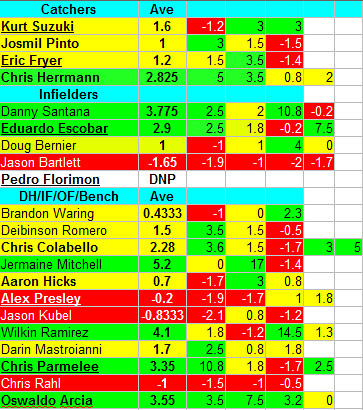 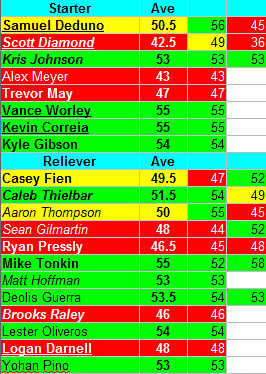 Scott Diamond's performance, even though collectively awful, and reflected by the lowest Game Score this season, it was a tale of two innings:  He pitched a really excellent fifth inning (which actually made me think that he might be a decent choice for the pen potentially, if he does not make the rotation,) and a really really poor sixth inning with balls going all over the place and a hard time throwing strikes. What was the difference?

In the fifth inning he pitched fast and had a very fluid delivery.  One single fluid non-stop motion. In the sixth inning he was tentative and looked like he was thinking too much about what he was throwing and it was a lot like last season.  When Diamond does that, he tends to do this exaggerated pause at the end of his delivery and it is very noticeable with his back leg:  The foot hangs up in the air with the cleats facing upwards and his his body parallel to the ground, and he stays there immobile for a full second or two, as the pitch is traveling to the plate and he is watching it hit the glove (or the bat or the dirt) in this position.

It might make a pretty interesting yoga posture, but not good baseball:  That pitch is almost in the glove, the delivery should have ended, both feet should be on the ground and he should be ready to field his position.  And all those things mentioned in the previous sentence were there for Diamond the previous (successful) inning.

I don't think that it is a cause and effect relationship (as if the exaggerated pausing and posturing would cause bad pitches) but a symptom of maybe forcing it up there or thinking too much or trying to be too perfect, instead of just pitching and letting go.  He did the same pausing at the end of his delivery all last season.

Just another thing to watch this Spring.

As in the past few years I will use dashboards to keep track of the performance of the Twins' players during Spring Training in order to get a numerical and visual representation of who is doing what, of the players who are battling for a position on the 40-man roster.  With few games in and the first cuts coming early next week, it might be a good time for the first one of these.

To determine that, we need to figure out who are the "locks" to come up North with the Twins.

As far as position players go, Joe Mauer, Brian Dozier, Trevor Plouffe, and Josh Willingham are locks for starting positions.  Kurt Suzuki is also a lock to make the 25-man roster, but not a lock to start, so he is included in the list.   A lot of people might think that Pedro Florimon might also be a lock, but I think that he has to work to make it up North.

As far as the pen goes, the only locks I see are Glen Perkins, Jared Burton, Brian Duensing and Anthony Swarzak, again pending trades.  The starting pitcher combatants for the last rotation spot(s) could also gain positions in the pen.

From the list I excluded players like Kennys Vargas, Byron Buxton, Max Kepler et al who will not make the Twins out of Spring Training. 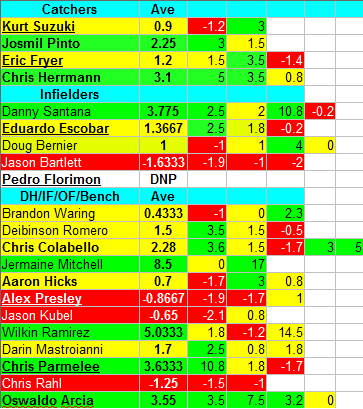 And here for the Pitchers: 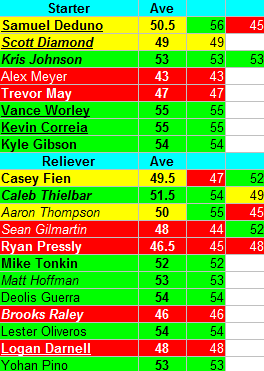