This season Mike Pelfrey has been very ineffective for the Twins.  Earlier this month, the Twins attributed the reason for Pelfrey's ineffectiveness to a groin injury, and placed him on the 15-day disabled list.   One of the obvious signs of concern was that even in his rehab assignment at AAA Rochester, Pelfrey could barely touch 90 mph with his fastball, losing a good 5-6 mph from last season.  After his last start at Rochester, he complained about his shoulder and the doctors concluded that it was his elbow that was "irritated".

Between then and now, additional information has been disclosed:


So Mike Pelfrey is about to get under the knife early next week. This is really bad news for the Twins, because these type of surgeries take 2-3 months before someone resumes activities with that arm and 4-6 months before someone can even challenge that arm in a game.  It is not "minor" as indicated in multiple places in that piece, likely based on the Twins' acting GM words.  4 to 6 weeks from now is October and November.   This explains a lot about Pelfrey's performance, but it does not help the Twins.  At least there is potential help at AAA Rochester in Trevor May and  Alex Meyer.
Posted by thrylos98 at 5:43 PM No comments:

Ben Revere does something he has never done before

It was just announced that Aaron Hicks has decided to stop switch-hitting and will exclusively hit as a Right Hand Batter.  This decision (which he made, suggesting that he lost confidence on hitting left-handed) was bless by the Twins' manager.  Hicks was hitting 263/.417/.342 (109 OPS+) as RHB and .149/.284/.209 as LHB so far in 2014.   There might be some adjustment hitting from the right side against RHPs, however it is a worth-while decision, which might give the Twins a reliable bat (and glove, who has been named as a top 100 prospect by Baseball America in 4 different seasons, and as late as 2013) at Center Field, without having to deal with transactions involving replacement level players. 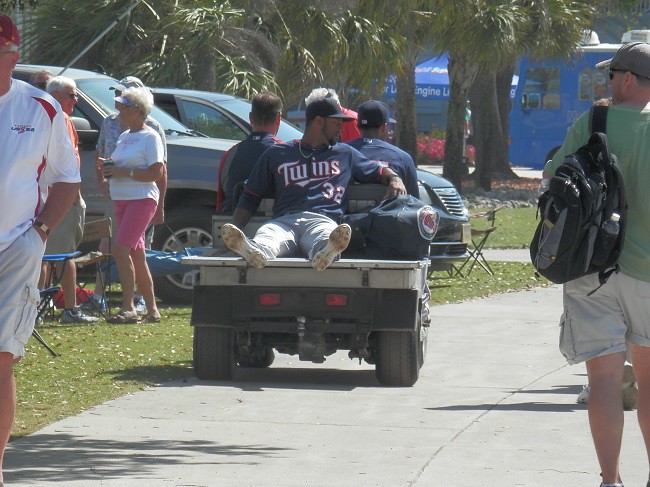