Cold weather and knuckleballs: R.A. Dickey and the season opener in Chicago

It is a somewhat accepted myth that knuckleball pitchers are doing better in domes (part of the Twins' intrigue by R.A. Dickey.) What is driving this argument is the theory that the lack of wind in a dome would not affect a knuckleball, allowing it to have its fluttering motion that makes it difficult for the catchers to catch and hitters to hit.

So, would it have been better for the Twins to start Dickey in the dome and give someone like Blackburn, Dickey's Cellular Field start tonight?

The answer is no.

There is another physical factor that affects a knuckleball more than the wind: Air density. The colder the temperature, the denser the air, the less the spin. And throwing a knuckleball with no spin, is like throwing a brick to the batters. I am not going to in depth on the physics of a knuckleball, other than try to explain in basic terms what makes it flutter and then I will go into the temperature stuff:

It is very similar to that of a fastball, but instead of running the middle and index fingers along the seams and trying to hold onto the ball only by the fingertips and thumb tip, the nails of the index and middle fingers dig into the seams, the first knuckles are close on the seams (thus the misnomer; a "nailball" would be more appropriate), which also has the effect of placing the ball closer to the palm, making it more of a change up grip. 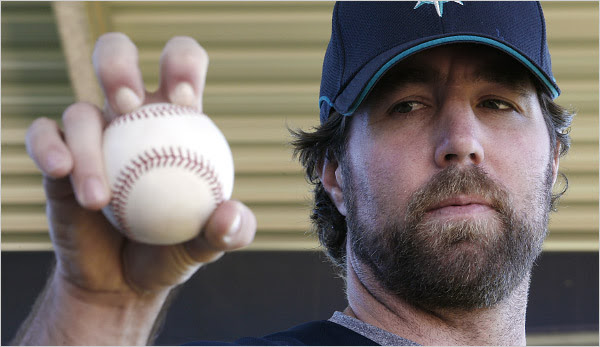 Why the motion: ideally, a knuckleball from the pitcher to the plate will do only one half spin, moving the seams that held them into the side (90 degrees). The drag (air resistance) of the seams (which increases relatively by the lower velocity of the ball towards the plate than traditional pitches) will cause the ball to have an increased sideways movement, thus "flutter". The argument against the wind is that a lateral (side to side) wind, would exaggerate the natural lateral movement of the knuckleball, making it more "wild".

That's what throwing a knuckleball is all about. How about the temperature effects? Higher temperature decreases the density of air molecules and low temperature increases their density. When it is cold and the air molecules are denser, this has two effects: a. it slows the velocity of the ball which, in turn, b. decreases the spin of the ball, thus making a knuckleball, flutter better. Here is an extreme example to make it clearer: Cold increases water molecule density. Is it easier to push your finger through liquid water, or through ice? The same principle applies to the air.

If you are not yet convinced:

Tonight's game conditions are perfect for R.A. Dickey.
Posted by thrylos98 at 11:40 AM

The 5 inning total line for tonights game is 5.

Do you think with the Sox bats performing so poorly, and a weather aided knuckle will allow for the under to be a better play?

Or do you think that maybe Contreras has the possibility of getting shelled, causing the over to hit?

I think that Contreras will get hit today. The Twins are hitting a career .315/.375/.500 in 130 AB off him (that's without accounting Crede). Also the cold weather cannot help someone with a bum ankle.

That said, I do not understand how these type of lines work :)