What's up with Frankie (and Andy) ?

Fransisco Liriano had another unfortunate outing today, pitching only 4 innings, surrounding 4 ER to further diminish the Twins record in day games to 3-12 and on the road to 5-16, dropping the Twins a full 6 games behind the Tigers in the loss column.

Liriano's return last season after his time in Rochester made a lot of Twins' fans hopeful about good things to come this year, based on his successful outings. Has anything changed with Liriano between last season and this season? The answer is yes.

However, there are 2 things different:

His release point is all over the place

Here is Liriano's release point from this game (courtesy Brooksbaseball.net) : 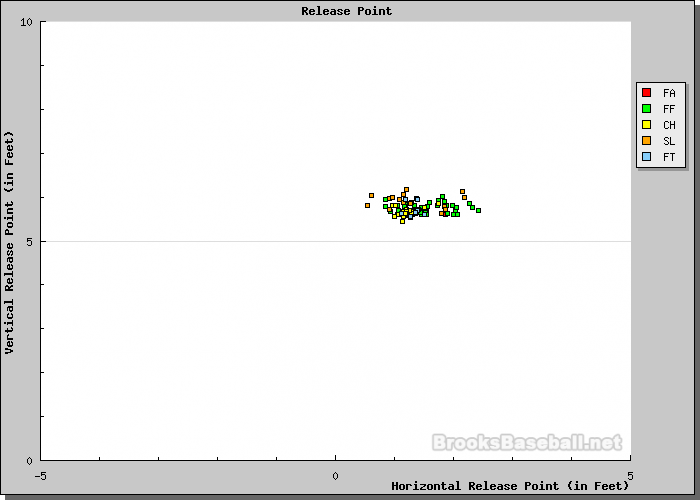 as you can see his release point is very inconsistent and their is a good two feet horizontal difference among the release points of all his pitches. Fortunately, unlike Baker, Liriano is not tipping his pitches. Sliders, Fastballs and Change ups are released from all over the place, but they are mixed. 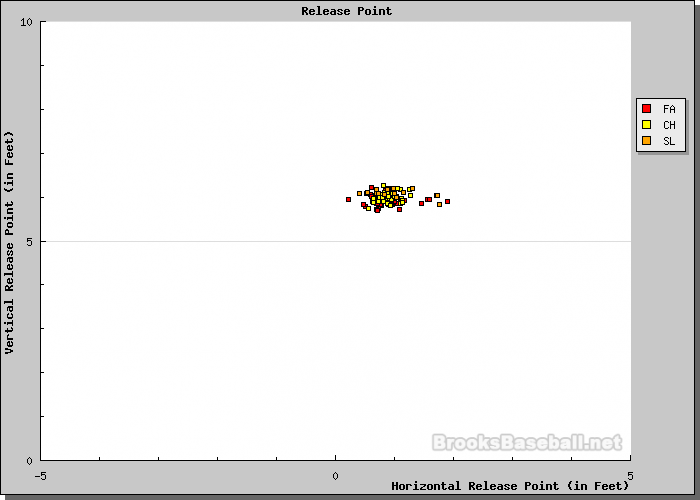 Even though a few pitches were way off to the right, the main core was fairly consistent. 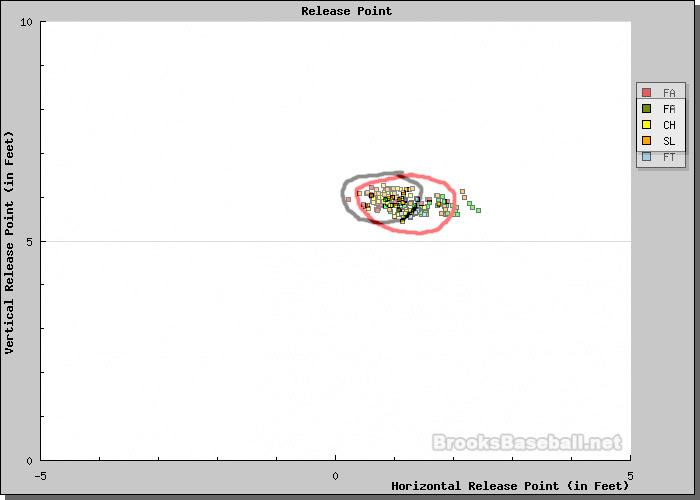 What does need to be done for Liriano to be fixed:

a. Get him throw more change ups and
b. Correct his mechanics so his release point is i. tighter and ii. closer to his body.

Simpler said that done, but Andy is the guy with the supposed magic wand that can fix every ailing pitcher.

do you think it might actually mean that Andy is the “atrocious” one here? This is a massive drop of performance in more than half of the pitching staff. Last time that happened to a team, the pitching coach was fired (see: Tigers, Detroit, 2008). Who can fix this.

My choice is one of the best pitching coaches available, who happens to be in the Twins' organization (and by coincidence is fully bi-lingual in English and Spanish, thus filling up another void in the team) : Bobby Cuellar.

Let's look at his track record with different pitchers:

So, if you were the Twins' brass, who would you rather have as a pitching coach:

The difference between night and day - part II

Yesterday, I pointed out the differences of the Twins' performance in day games vs. in night games and showed the following:

A very astute comment in that post (unfortunately anonymous, so I cannot attribute credit) indicated that there might be another potential explanation, that the Twins are facing better pitchers, and suggested that I look at the OPS of the pitchers in general vs. the OPS of the Twins in those particular day games. Brilliant suggestion.

Here is what I did: I looked at every single day game the Twins played this season and calculated 3 things:

Here is a list of every day game the Twins played this year, with the results of the game, the opposing starter and the aforementioned three things:


The average ratio of the Twins OPS against a particular pitcher in a day game over that of his opponents in all other games this season is .873 (and somewhat skewed to the Twins' favor by the 20-1 game against Colon.)

My conclusion is that they are not facing better pitchers during the day games, they are just not hitting as well...
Posted by thrylos98 at 1:34 PM 1 comment:

The difference between night and day

This season the Twins are:

Here are how the different Twins' batters are faring during the day and night (today's game is not included) :


What can be done to fix this problem? These 3 quick fixes:

But, is it a fluke? Let's look at the Gardenhire Twins' record in day vs. night games since 2002:

So other that the unfortunate 2007 season, the Gardenhire Twins are not doing as well in day games as they do in night games. That is a problem that needs to be understood and addressed by the organization...
Posted by thrylos98 at 6:08 PM 3 comments:

How bad was Todd Tichenor calling balls and strikes today?

Todd was the home plate umpire in today's game, which the Twins lost 1-3 to the Boston Red Sox. Both teams had complaints about his ball and strikes calls that resulted to the ejection of Veritek and Francona in the 7th inning. In the top of the inning Redmond and Gardenhire also got ejected, but that was for arguing a close call to the plate that went the Red Sox way, allowing a runner to score from 3th on a fly ball to Kubel.

So how bad was his ball and stike calling?

To answer this, I am looking at PitchFx data from Brooksbaseball.net, in all 4 games of the Boston series and more specifically looking at the starters for both teams and the pitches that were in the strike zone but called balls by each of the four home plate umpires.

Here are the data from today's game (green is ball, red is strike, blue is contact): 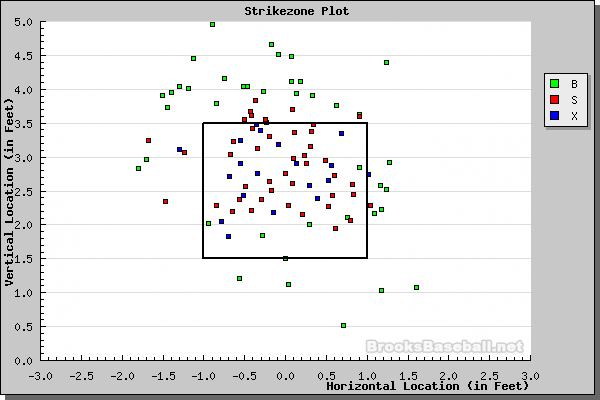 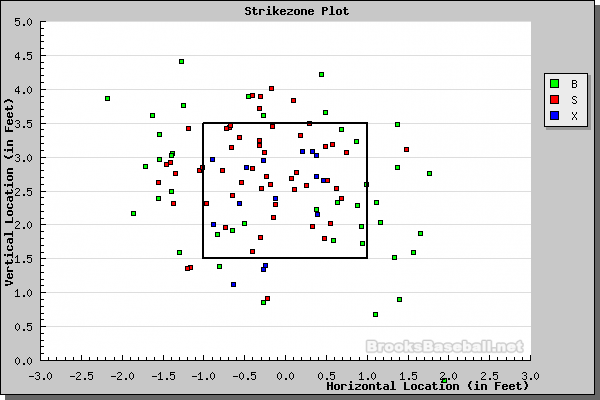 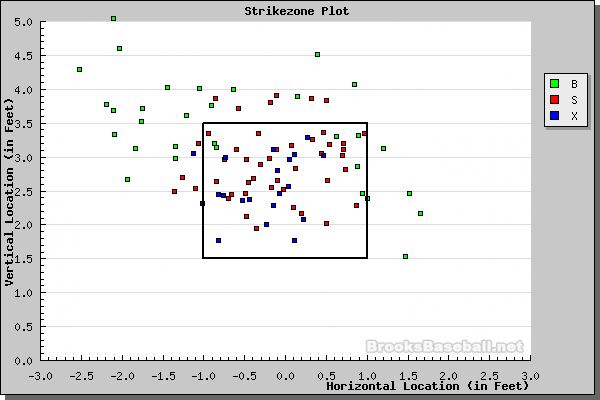 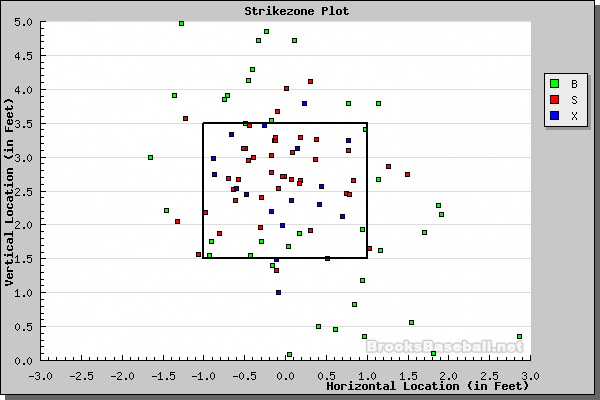 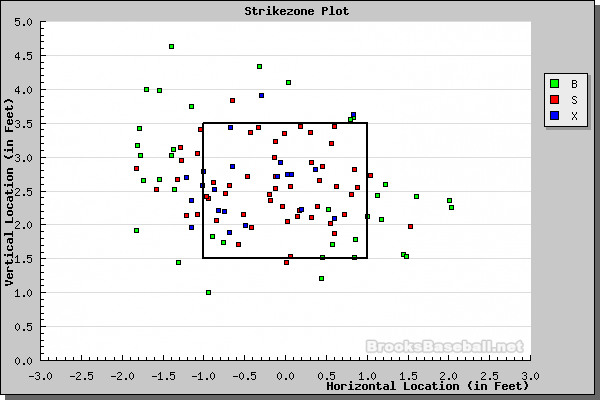 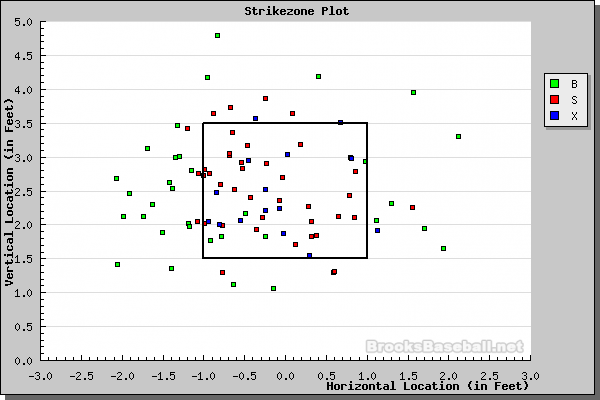 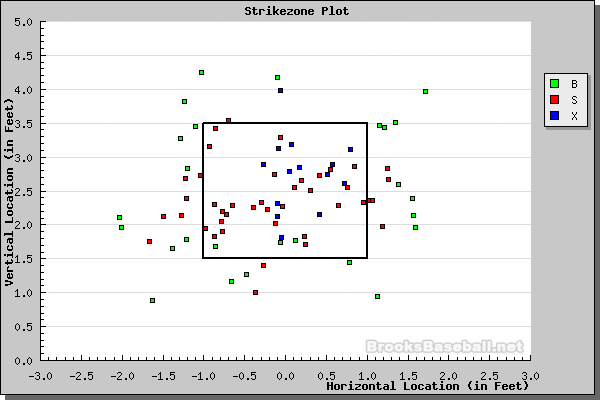 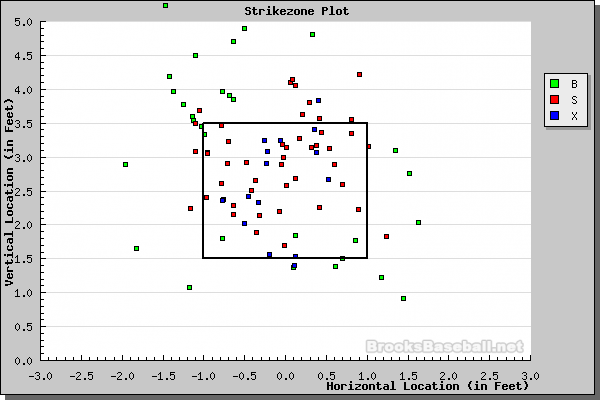 What conclusion's can one draw from this? First of all, Todd Tichenor today was worse than all umpires in this aspect, but not that much worse than Chris Guccione was last night. I think that the fact that it was a closer game had a lot to do with it. However, he was fairly consistent, since everything outside to a right hand hitter was called a ball within an inch or 2 of the zone (in a similar way that Guccione called all low strikes balls last night). The bottom line is that umpires can affect the game, but players and managers should not let that happen, but making adjustments to a particular umpire's strike zone. On the other hand, Tichenor tossed both catchers pretty quickly without giving time for their managers to step up and intervene...
Posted by thrylos98 at 4:48 PM No comments:

Who is hot in the minors V3

This is the third version of the list of the best performing players in the Twins' minor league system year to date. A reminder that several players are still in extended spring training since the Elizabethton (Appalachian League) and the Gulf Coast League rookie teams have not started their seasons yet. The numbers are as of 5/25. Some players have dropped from the list either because their performance dropped or because they were promoted (Swarzak, Henn):