Another comeback for the ages!

highlighted by a grand slam to complete hitting for the cycle by Kubel. It seems that the Twins are going to spoil us with comebacks this season.

Today the Twins designated Phillip Humber for assignment and claimed Juan Morillo off waivers from the Colorado Rockies.

Who is Juan Morillo?

Juan is a 25-year old righty from San Pedro de Macoris, Dominican Republic, who was signed by the Rockies in 2001 as a 17 year old. He is a flamethrower. His main weapon is his fastball, that averages in the high 90s and occasionally hits triple digits. He has a 89-90 mph slider and a 88-89 mph "change up". His control has been a work in progress, and has been his biggest downfall. Additionally, lack of movement in his fastball has been pointed out. Thus the earlier comparison to Rick "wild thing" Vaughn from the movie "Major League".

Can Juan Morillo help the Twins?

At some point, Colorado organizational scouts had ranked him higher than Ubaldo Jimenez when they were both with the Modesto Nuts (California League, A+), in 2005. Here is what a Rockies' scout had to say about Juan Morillo then:

I thought the emphasis on patience practiced in Midland would hurt Morillo, but his command looked much improved from the first time I saw him this season. It's hard to tell if his fastball moves because I could hardly pick it up through the black net. His fastball and the Midland starter's fastball were like night and day, and few hitters could get around to pulling the ball on Juan. Produced tons of weak liners, soft grounders and high pop ups. Only three balls put in play appeared to get hit squarely. Fastball was outstanding, but slider came and went. I liked that he pitched more for contact and went after hitters, because even a 99 mph-er down the middle is rarely struck well. Very promising start. He still has needs work, but he's a legit top ten organizational talent, and should reach the bigs and contribute in some fashion.


Will Morillo turn into a top notch set-up guy overnight? It is unlikely, but he is still 25 and if used appropriately he might surprise. He will be removed from the thin air of Colorado and the Pacific coast league, which does not allow a slider to break as it should. He will be moving to a league that no batter has faced him before. If he throws strikes and is able to get his slider over the plate, he will be a good addition to the club. A high reward, low risk situation, which shows that Smith is not afraid to do moves that help the club. It would be great, if Morillo turns out like the last pitcher Bill Smith picked out of the waiver wire: Craig Breslow.

Like Phillip Humber, Juan Morillo is out of options and has to stay in the Twins 25-man roster all season or be exposed to waivers. Morillo was assigned uniform number 31. The last pitcher who wore 31 was J.D. "The Real Deal" Durbin. Let's hope that Morillo performs closer to the first pitcher who wore number 31 for the Twins, Jim Perry.

Juan Morillo is a Twin

The Twins just claimed Juan Morillo off waivers from the Rockies and designated Philip Humber for assignment.

A full profile of Juan Morillo is here, but this video pretty much summarizes Juan Morillo. I wonder whether they will issue him the number 99 jersey.

looking between the lines: the first three series in the books.

The Twins finished their first three series of the 2009 season and are sitting with a 4-7 record in the 4th place of the AL Central, having won a single game more than the Cleveland Indians. This is a disappointing start, and all the parts of the team (Starting rotation, bullpen and bats) have contributed equally. Let's look closely, trying to pick possible glimmers of hope:


Position Player MVP of the series with Toronto:

Best Pitcher of the series with Toronto:

The curious case of Kevin Slowey

A lot of people (including me) have been expecting greatness this year by Kevin Slowey, after his great pitching last season, followed by a tremendous spring training performance.

How worried should the Twins be about Slowey?

My answer is: not that worried. Here are the reasons:

My conclusion is that Slowey will rebound very soon and will end up having the great season that a lot of us expected from him. What do you think?
Posted by thrylos98 at 4:50 PM 3 comments:

Last night's game was a big disappointment for the Twins' Fans: The bats were alive, but Slowey and Ayala were not on the top of their game, resulting to turning the game in the favor of the Blue Jays, pretty quickly at the late innings.

Here is a closer look to the win probability graph by fangraphs: 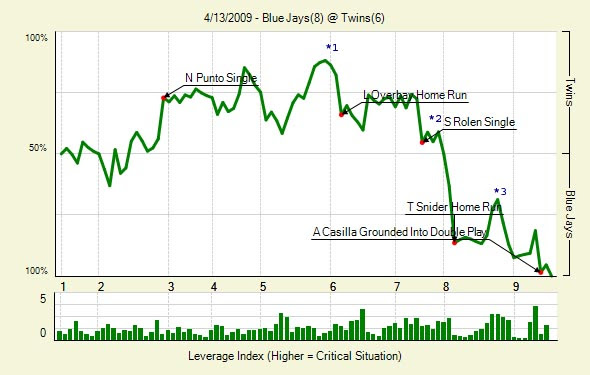 I marked 2 points with asterisks (*1, *2 and *3), because I think they were the turning points of the game and they were bad decisions by Ron Gardenhire:

*1: Kevin Slowey has been struggling throughout the game, but Gardenhire sends him in to start the 6th inning. At this point, the Twins are about 85% win probability. If Slowey left the game then, and the Twins won, he would have been credited with the win. Slowey allows a hit to Rolen. Instead of taking him out at that point, Gardenhire lets him face the next batter (in a manner similar to that allowing Liriano to face multiple hitters after he walked in a run with the bases loaded in the last game of the Chicago series). Overbay hits a home run and the Jays are within 2. A little too late, after facing 2 more batters and walking one, Gardenhire lifts Slowey for Guerrier. Guerrier finishes the inning and starts the next. Breslow replaces him in the 7th after he gives a hit and strikes out the only batter he faces. At this point, Gardenhire, uses Breslow again only to face a single lefty hitter and replaces him with Ayala who finishes the 7th giving a hit and driving a run with 2 outs to bring the Jays within 1 (6-5 Twins)

*2: Top of the 8th inning. You would think that Crain is the 8th inning man, esp. with Ayala having problems the previous inning, who can provide a bridge to Nathan. But this is not the case: Gardenhire keeps Ayala in. A double and a home run later, the Twins' win probability drops from 75% to 15% and the score is Jays 8, Twins 6. That was the biggest turning point of the game

*3: Bottom of the 8th, the Twins hitters are staging a comeback: Brendan Harris doubles to start the inning and goes to third with no outs on a wild pitch. Delmon Young is up. The Twins have a great batter and the best AL Centerfielder in Carlos Gomez on the bench, one would think that getting Gomez in to sacrifice Harris (or get a bunt base hit) would be the proper play (or at least have Young try for the sacrifice). The win probability with Harris at 3rd, nobody out and the Twins down by 2 runs, climbed up to 30%. Young strikes out. Gardenhire, still going for a 2-run homer instead of getting the man from third in with a sacrifice, substitutes Crede for Morales. Crede strikes out. Punto strikes out. Inning over.

Last season, Gardenhire's mismanagement of the pitching staff and the bullpen, cost the Twins the division championship. He was rewarded with a contract extension. Apparently he has not yet learned his lessons from last season. I hope he learns them pretty quickly before this season gets out of hand.
Posted by thrylos98 at 9:03 AM 7 comments:

looking between the lines: Series one and two in the books.

The first 2 series of the season are in the books. As I promised, I will not be doing game analysis (there are just way too many of those, and most of them are great, already in the internets.) What I will be doing, is continue to look between the lines for facts about the team's performance that have not been stressed much as well as for clues about what a particular set of games, might imply for the near future.

The Twins lost the series to the Chicago White Sox at the US cellular field, 2-1, after winning Joe Crede's homecoming by a comfortable margin, mainly due to offensive issues the last 2 games.

So far this season the Twins are 3-4. What does that mean? Last year the Twins also started the season 3-4. Let's look at some of the specifics of the 2008 and 2009 teams' performances and try to see whether there is anything of note in this comparison:

a. they equaled the record of the 2008 team that went on to win 88 games, without Joe Mauer and by having a home series and an away series; the first 7 games of 2008 were at home against the Los Angeles Angels of Anaheim and the Kansas City Royals.

b. the 2009 team seems more efficient with the bat than the 2008 team. It scored 7 more runs in the same 7 games with about equal team OPS. If this continues, and esp. if this offensive effort gets more equally distributed among games, is a very positive sign.

The bottom line from the first 2 series is that:

What is coming up? A 3 game home series with the Toronto Blue Jays and the return of Scott Baker who pitched 7 very efficient innings in a Florida State League game with the Ft. Myers Miracle last week. One of Philip Humber, R. A. Dickey and Brian Duensing will probably leave the team when Baker returns. I think that the obvious choice is Brian Duensing, not because he pitched worse than Philip Humber, but because, unlike Humber, he has options. R.A. Dickey has earned a spot and should be with the Twins in a bullpen role.

Position Player MVP of the series at Chicago:

Best Pitcher of the series at Chicago: