Can the Twins rebound? Part III: Quick ranking of MLB middle infielders and not only free agents

Yesterday I examined the Twins' performance in 2011 and indicated that fielding and hitting were subpar and really needed to improve. Outfield defense with Span and Revere will be fine and also indicated 3 free agent additions (2 OF/DH and a C) who are power right hand bats and will be able to improve both fielding and hitting (and in case of one, base running) if they join the team in 2012.

Looking at potential middle infield targets is a necessity, because the overall Twins' middle infield defense was a very sore point in 2011. So the requirement is that a new acquisition should not field worse than what the Twins have in house. In other words, we want to improve the defense. So players with less than average (0) fielding are not included

Thus, I am listing all MLB SS and 2B who had positive "Fielding" (Fangraphs value. I am also listing their "Hitting", "Base Running" and Wins Above Replacement values. 2012 Twins' players are in Bold and free agents are underlined.

So what do the Twins do? Ideally, they want to improve the fielding but do not not want a player who has a large negative impact in the lineup as far as hitting and base running goes(i.e an all glove no bat player.) If you look at the free agents Clint Barmes, Ramon Santiago, Jimmy Rollins (not really a realistic possibility), Cesar Izturis, Kelly Johnson and Nick Punto fit the bill. There are not many good or even average bat better than average middle infielders in the majors and I cannot imagine that the ones who are under team control are realistic trade targets for the Twins. Just look at the list. There is another option, that might sound a bit counter-intuitive (and it is very similar to my contrarian starting pitching opinion:

The Twins have an average fielding and average hitting shortstop (Alexi Casilla) and an above average fielding and below average hitting second baseman (Luke Hughes). The problem is that they did not play much in those positions and additional players (Cuddyer, Nishioka, Plouffe, Tolbert) took a lot of innings. So unless the Twins get one of Barmes, Santiago, Johnson, Rollins, Izturis or Punto, they will be better of starting the season with Alexi Casilla in SS and Luke Hughes in 2B, instead of lesser fielding alternatives.

Looking at what went wrong with the 2011 Twins club and try to prioritize changes that would help the 2012 club rebound, I have previously examined the starting rotation, and concluding that despite the conventional words of wisdom, it should not be a priority, if the best pitchers are used and if they stay healthy. The bullpen is a different story, which I will try to examine in a later day; so let's examine the position players. 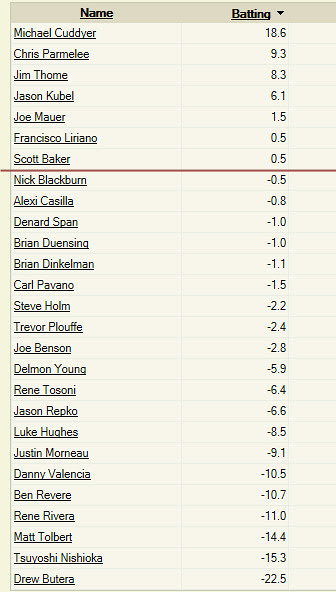 as you can see only 2 current non-pitchers had positive value with the bat (Jim Thome was traded and Mike Cuddyer and Jason Kubel are free agents). And with Parmelee probably starting at AAA Rochester, Joe Mauer is the only 25 man roster in 2012 who had a positive batting contribution. This is a problem. We also know that this team is practically devoid of power right hand bats, especially with Cuddyer a free agent and Delmon Young traded. With Morneau healthy and potentially Parmelee in some role, left handed power might not be much of an issue, and this team is slated to have at least 4 LH hitting strarters (Mauer, Span, Revere, Morneau) so more balance is needed 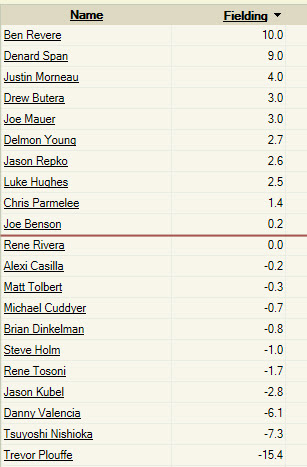 From the remaining 2012 players there are stong outfield fielders (Revere and Span), catching is not a problem, first base is not a problem if Morneau is healthy, but infield is a problem, other than Luke Hughes (2.6) and Casilla (-0.1 league average). Also a 3rd outfielder is needed. 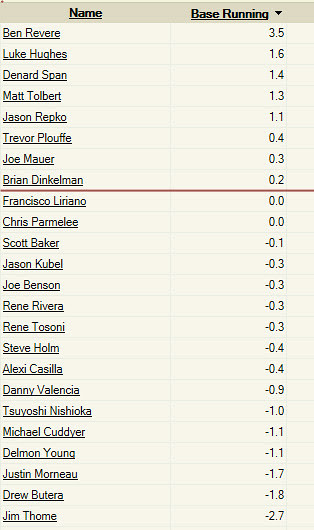 Running was supposedly the strong suit of the team, but the data indicate that only a 3 players (Revere, Span and Hughes) were above average, several were average and a lot were not that great. So this element should be upgraded as well.

Surprisingly, Luke Hughes was both an above average runner and defender, and he should have a role in the 2012 team.

So hitting is a problem. Kubel and Cuddyer are free agents. Should the Twins be knocking at their doors and signing them as fast as possible? Especially Cuddyer who is a power right hand bat? Let examine how Cuddyer and Kubel stack with the other availbable 2012 free agents. The following list is ranking free agents by IsoP (Isolated Power) and also displays the Fangraphs Defence and Running values (Minimum 100 PA) for their 2011 seasons:

Clearly the Twins will not make a run for Albert Pujols or Prince Fielder (and they don't need to). Signing Andrew Jones and Jonny Gomes to replace Mike Cuddyer and Jason Kubel, would provide better power and better fielding and in Gomes' case better base running (his 2011 runnning value would rank him second in the 2011 Twins behind only Ben Revere). In addition, there will be some money left over to sign Ryan Doumit upgrading the C position offensively and providing some 1B insurance (the other argument about re-signign Cuddyer.) An outfield of Revere,Span, Gomes/Jones (with the other one at DH) will also provide superior defense for the Twins' flyball starters.