A milestone has been reached

Separated at birth (or a long lost parent?) 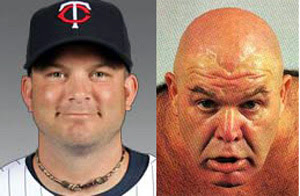 Brian Buscher and George "the animal" Steele
Posted by thrylos98 at 10:15 PM No comments:

pen vs. rotation is a chicken vs. egg problem imho, and I am sure that there are a lot of “gut feelings” about what needs to be fixed out there…

The rotation got a boost by the Liriano for Livan change. Even though it has been an up and down situation, I am not sure that there are better options out there for the remainder of the season.

As far as the pen goes, I think that Guerrier will rebound, since he has been very unlucky this month (opponent BABIP July .300, August .522; and any way you cut it, those numbers indicate that there is more than ‘overuse’, ‘tired arm’ etc.) It is still amazing to see Bass with the team. Bringing Korecky up for middle relief (* what is that Gardy garbage that ‘Korecky has to develop a change up before he makes it to the majors’ while Bass has no plus pitches, btw?) and keeping Boof for mop up work exclusively when the game is out of reach with the hope that he might turn it around next season, might help a lot for the remainder of this month.

Overall is a bit frustrating to see large leads lost, but I think that no major changes are needed (and even if there were needed, they could not happen) at this point…
Posted by thrylos98 at 11:24 AM No comments: