Bill Smith made a sizeble splash in the free agent market by singing Joe Crede late last night to a fair contract, that is loaded with incentives. I wrote about the potential risk that Crede might be. The Twins' fans are familiar with him. Is there anything more one can say as an introduction to Crede?


Unlike pitchers, BABIP variations for batters do not signify "luck". Here is a good article that describes BABIP and hitters, in English. There are a lot of factors that might affect BABIP, but to make a long story short, the reason that Crede's BABIP decreased dramatically, is that his line drive percentage also decreased dramatically in the majors from 2002. Here are his yearly LD%:

Root cause found. Crede needs to get more line drives to increase his OBP and OPS. Line drives are not necessarily the hardest hit balls, but they do fall for a hit around 75% of the time. Huge factor for one's BABIP.

Is it fixable? Why would one stop hitting line drives? I looked at various places in 2003 to see whether something happened that might have affected Crede, and I found this tidbit. Apparently the White Sox coaching stuff in order for him to stop swinging at outside pitches, they turned him into a pull hitter vs. an all field hitter (and his 2002 season, see above, indicates that he indeed has power in all fields). I need some more sources to verify this, and expect and edit as soon as I find it.

Edit: Here is an additional reference to Crede's new swing and approach in 2003. 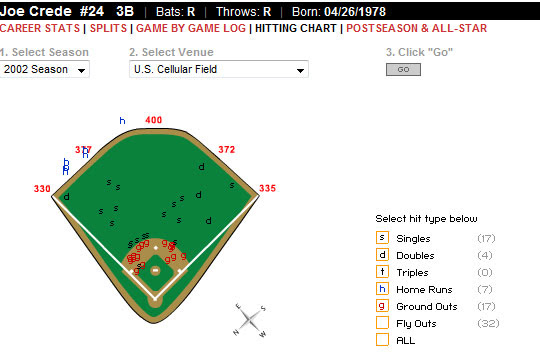 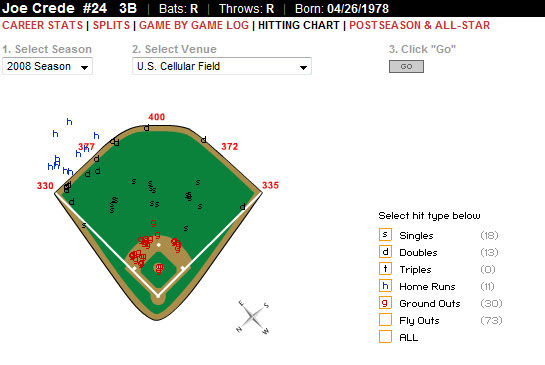 I am including all hits and ground outs. This confirms that in 2002 when Crede had high OPS (driven by high BABIP, which in turn was driven by high LD%) he hit the ball into the opposite field and the change in his approach sometime in 2003 that turned him into an one dimensional hitter and reduced his OPS (again, BABIP and LD% driven) but decreased his Ks and increased his walks, reduced his all field hitting ability as indicated in his 2008 spray chart. Hypothesis confirmed.

I guess we'll find out tomorrow

The (potentially good) problem with the Twins minor league system is this:

The Baseball Prospectus released today their annual Twins' prospect list. Here it is:

They also list Tolleson, Swarzak and Mijares as "just missed". Interesting comparison with the scout.com list that was published earlier this month. It seems that the value of Plouffe and Tyler Robinson is widely distributed among the national baseball media
Posted by thrylos98 at 12:21 PM 3 comments:

Bobby Korecky was claimed off waivers by the Diamondbacks today, when he was removed off the 40-man roster to open a spot for Luis Ayala. He will have a chance to win a spot in Arizona's pen and the Twins would have a change to showcase Delaney (or Mijares if he does not make the 25-man roster) as the closer in Rochester. Korecky will be 29 this season, and would have a better opportunity to stick with the Diamondbacks than he would have had with the Twins. Good luck in Arizona, Bobby.
Posted by thrylos98 at 2:37 PM No comments:

A bit of an update

The day almost passed and there were news about any roster moves for the Twins, so that Ayala can start being integrated with the team. As is he can run around the field and practice with the Twins (like Corey Koskie is doing) but cannot participate in team drills and team activities (the latter at this point of the Spring training are zero.) This delay is screaming to me that there is a trade brewing some place. Stay Put.

On other division news, after La Velle Neall III broke the possibility that the league and the union might agree to a sign-and-deal for type A free agents, there is more than a word from both Chicago and Kansas City that Orlando Hudson might end up with one of the Twins' division rivals.

Not sure what to think about Boof's and Mauer's injuries, but they seem more worrisome than previously thought.

The Crede situation is still brewing.

Liriano, will not pitch for the Dominican Republic in the WBC.

I will update as news come in, but so far this is soaking sun time for the Twins...
Posted by thrylos98 at 8:50 PM 2 comments:

The Twins have to announce a new transaction by tomorrow. They held making official the signing of Luis Ayala, because their 40-man roster is full. Neshek cannot move to the 60 day DL to create an opening because the DL does not start before the season. To participate in spring training Ayala needs to be in the roster.