Might be the fourth shortstop, the next center fielder, or the fifteenth pitcher, but there is a new guy in the Twins' dugout (all the way to the right) 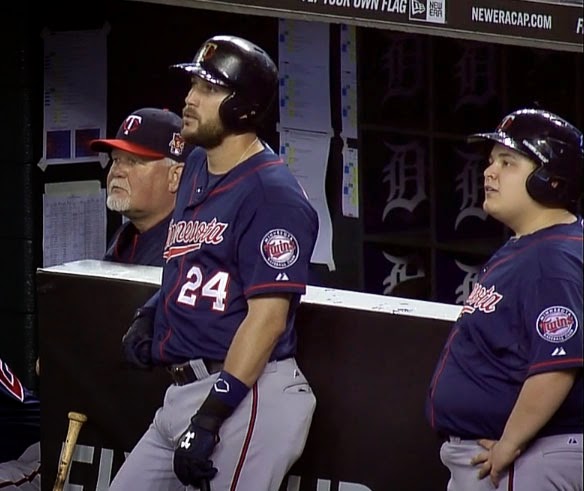 The Minnesota Twins must have broken a non-trading deadline and a non-camp breaking record for most roster moves in three days.   If you lost counting, here they are, chronologically:

These moves that involved 10 players could quickly become 14, if Kenny Wilson get claimed by another team.

For reference, here is the current 40-man roster.  The Twins still have 14 pitchers and 3 shortstops on their MLB 25-man roster. 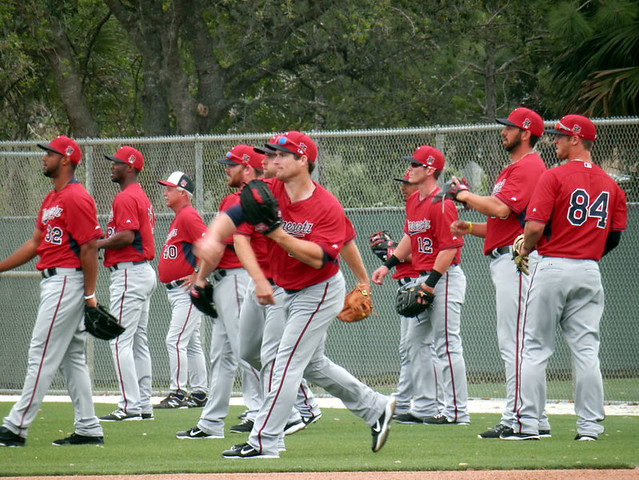 Target Field is universally known as one of the nicest and most state-of-the-art ballparks in the MLB. One of the reasons for this reputation for the relatively new ballpark is the high prevalence of bar space throughout the concourses. In fact, Target Field has the most square footage of bar space of all MLB stadiums. These bars can be found all over the ballpark, but there are a few in particular that fans should be sure to check out.

Right behind home plate near Section 114 on the Main Level is Hrbek’s Pub, named after Kent Hrbek. Even though there are only stand up tables and no places to sit, the large outdoor patio is the best part of the area with a great view of the game while having a drink at the bar.

Near Section V down the third base line of the Club Level is the Town Ball Tavern. Fans can come here for many options of beer on tap as well as the option to drink alcohol after the 7th inning of the ballgame, something not found in many areas of this ballpark.

On the Terrace Level behind home plate near Sections 317 and 318 is the Two Gingers Pub. There are actually two bars in this area and this is the only bar in the stadium that serves exclusively alcohol and no food. The big draw in this area other than classic Minnesota whiskey is the opportunity to see Sue Nelson, the legendary organ player for the Twins, in action throughout the game.

Looking to buy tickets near one of the exciting bars or want to find other great seats for socializing at a Twins game? RateYourSeats.com helps you find the best seats at Target Field by providing in-seat photos, seat ratings and reviews – all on a super-charged Target Field Seating Chart. Next time you’re looking to buy Twins Tickets, use RateYourSeats.com to get the best seats! 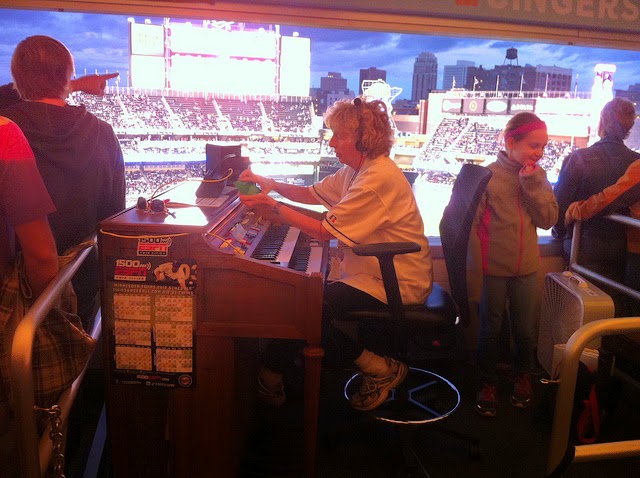 The hottest hitter in the Twins' organization, in the worst jersey

What to expect from the series between the Twins and the Indians.

Next week the Minnesota Twins are starting a four game series at Cleveland against the Indians.   Before the 2014 season started, plenty of writers predicted that these teams will have diametrically opposing seasons, with the Indians fighting the Tigers for the American League Central Division title with about 90 wins, while the Twins would be hovering in the basement of the Division again with about 90 losses.  You can see a sampling of predictions from a major neutral newspaper (the Philadelphia Inquirer) here.   An ESPN expert, Jeff Bennett, even predicted that the Cleveland Indians will win it all in 2014 (Scroll down to the end of the predictions in this link.)    Even long time Twins' bloggers, predicted another slim cows season for the Twins, examples here, and here.   Add the observation that the Twins would have the toughest schedule at the American League, and the expectations were that the Twins and Indians will be in opposing places on the Central Division Standings.

The reality could have not been much different.  With Sunday's games pending, both teams have won  13 games while the Twins lost 2 less than the Indians (15 vs. 17) and both teams see themselves in the bunch of the Division that includes everyone but the Tigers from 4 to 5.5 games behind the Division leaders.  Regardless what your favorite predictions for the series are, and you can view the latest odds for the Twins and Indians here, this is an important series.  The rest of the games in the AL Central Division are: The Chicago White Sox are playing at the Chicago Cubs, the Kansas City Royals are playing at the San Diego Padres, and the Detroit Tigers are hosting the Houston Astros. Unless the Astros go above and beyond what they have shown this far, the winner of the Twins-Indians series, will simple keep up with the Tigers at that four to five games behind, while the loser will likely fall in the Division basement with a long climb ahead.

Hard to see this as a critical series this early in the season, and for many, what the Twins have done already (based mainly on an unexpected capability to score runs) is a bonus.  The starters are Kyle Gibson vs Zach McAllister in the first game, and Gibson took the win in Cleveland pitching 5 innings allowing an earned run on April 5th when the Twins beat the Indians 7-3.  Samuel Deduno vs Josh Tomlin in Tuesday, with Deduno making his first start this season.  Deduno is 3-2 with a career 4.00 ERA against the Indians, while Tomlin is making his first start in the majors in the last seasons and was just promoted from the AAA Columbus Clippers.  Wednesday sees the Twins number one starter Ricky Nolasco matching up with the Tigers youngster Danny Salazar.  Both Nolasco and Salazar had no decisions in their respective teams' wins in the Cleveland match ups earlier in the season (Nolasco on April 6th when the Twins won 10 to 7, and Salazar on April 4th when the Indians won 7 to 2.)  The series will close with Kevin Correia battling the Indians ace Justin Masterson on Thursday early afternoon.  Masterson had a lackluster appearance against the Twins on April 6th and took the loss (3.7 IP, 6 R) while Correia did not face the Indians this season, but last season in two starts he has a split record of 1-1, while allowing the Indians batters to hit just .214 off him.

All in all, it will be an important and interesting series, and the Twins do have the pitching match ups to get ahead in this one. 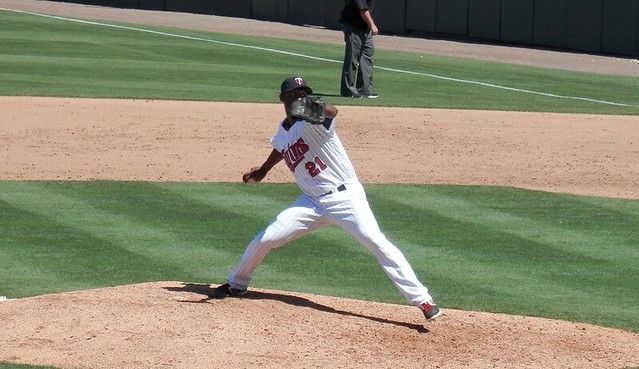