Today the Twins announced the 23 non-roster players who were invited to the 2014 Spring Training.  This makes a total of 63 players attending.  This is pending any transactions in the following couple of months.

Here are all the players participating in the Twins' Spring Training by position and with the known assigned uniform numbers, with the 40 men roster players in bold:

Clutch hitting and pitching and the 2013 Twins.

"Clutch" is a word that has been used to describe the players who go above and beyond the norm and perform highly in difficult situations in close games:  The guy who comes into the game with 2 outs and the bases loaded, down three in the bottom of the ninth and hits a grand slam off a closer who never blew a save.  The pitcher who comes in with bases loaded and no outs, up one on the bottom of the ninth and strikes out the side to save the game.   Whether or not there are players out there who are "clutch" and consistently outperform themselves in those type of situations has been a vast subject of debate.  Here is a good summary of a few historic studies and here is a list of lots of links on the subject, if you feel like reading more.

About 5 years ago, David Appelman devised a measurement called, well, "Clutch" that tries to describe clutch hitting and pitching.   Basically what it does, is it looks at the difference of someone's performance (based on Win Probability Added) in High Leverage situations only, versus his overall performance.   Players with positive Clutch outperform their overall performance in those situations and players with negative Clutch underperform.  This does not mean that a player with a higher Clutch is a "better" player than one with lower Clutch.   If someone hits .220 with the bases loaded and .200 overall, is not a better player than someone who hits .320 with the bases loaded and .340 overall, despite the Clutch numbers.

Fangraphs picked the stat now and I sorted the Twins hitters, relief pitchers and starting pitchers based on Clutch.  This is an exercise just for fun.  I don't think that it means that much (see example above), but it is interesting and it potentially be an additional tool for player evaluation, but not a stand alone tool.  Situational and High Leverage performance definitely might tell something about relievers as a group, but we are not about to jump into any conclusions here.  Just a demo :) 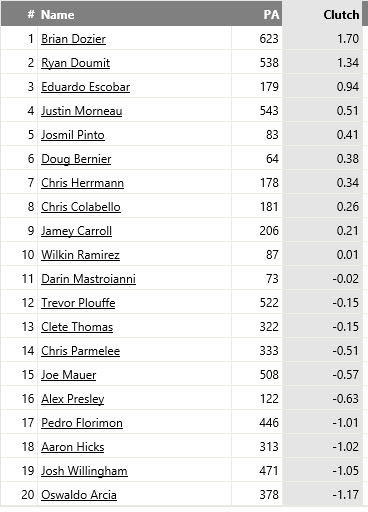 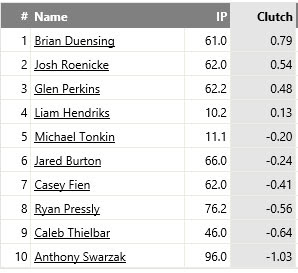 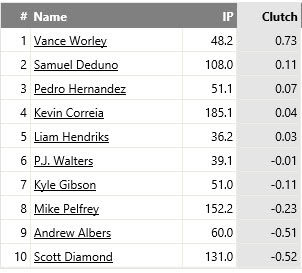 Pitchers in both roles are listed on both tables for that role only.  A couple of observations:

Now that the top three free agent hitters have all been signed to long-term deals, it is time to analyse what type of impact the change in scenery will have on their fantasy baseball numbers. The three left-handed bats (Jacoby Ellsbury, Robinson Cano and Shin-Soo Choo) all want to have career years to justify their contracts, but can they meet expectations?

Ellsbury battled some injuries a season ago, but he was healthy enough to help lead the Boston Red Sox to the World Series. Fantasy baseball  owners were still able to enjoy a .298 average from him and 52 stolen bases, but his power disappeared a little bit. That should change a little now that he is playing half of his games in Yankee Stadium. Health is the biggest issue for him here, but if he can stay on the field, his fantasy baseball numbers will be near career highs.

The Yankees were able to pay Ellsbury because they didn’t spend money on second baseman Robinson Cano. After being the main cog in the lineup for New York all last season, he will be switching coasts to play for the Seattle Mariners. A lackluster lineup surrounding him (even after improvements) and a bigger stadium could hurt his power numbers a little bit. Fortunately, Cano is a good enough line drive hitter that his numbers shouldn’t dive too much.

Finally, Choo goes from one good situation to another, as he signed a deal with the Texas Rangers. He put up nice numbers in Cincinnati in 2013, sporting an on-base percentage of .423 and slugging 21 home runs. He won’t have to play centerfield in Arlington, and he gets to hit in a stacked lineup in a hitter friendly ballpark. Expect some of his best career numbers this upcoming season as long as everyone else lives up to expectations. Some should worry slightly about his age and injury history, but he is still a top flight fantasy baseball option.

The chronicle of the shoulder injuries of Twins' RHP Samuel Deduno

Last season, after his World Baseball Classic performance (which ended with a pulled groin that made him miss a chunk of Spring Training and 44 games with the Twins) and his consistent performance in June and July that had him enter August with a 7-4 record and a 3.18 ERA in 12 starts, made many people in the Twins Cities  call Samuel Deduno an"Ace".   This included several well-respected mainstream media. (For sample of relative stories, look here, here, here, here and here.)

Not sure whether calling Deduno an "Ace" (which, of course, he never was; being the only pitcher who gives a bad team a semi-consistent change of staying close in a game, an "Ace" does not make) caused a hubris-derived curse, but he was never the same afterwards, because of an injury that caused him to have double (labrum and rotator cuff) shoulder surgery the Fall, making his trip up North breaking camp with the Twins pretty dubious.

When (then interim) General Manager Terry Ryan, returned to that role with the Twins after the 2011 ninety nine loss season he identified several places that needed change in order for the team to improve.  In addition of the firing of Jerry White and Rick Stelmaszek, the retirement of Steve Liddle and the "no scholarships" approach about certain players like Tsuyosi Nishioka,  and the reassignment of the other remaining coaches, Ryan fired the Twins' head athletic trainer Rick McWane, establishing medical treatment of the players as one of the areas for improvement and part of the cause of the Twins demise in 2011.

How well have those changes worked in 2013?  Let's look at the chronicle of Samuel Deduno's shoulder injury, diagnosis and treatment, with stories from last August on as they happened, and let the readers reach their own conclusions:

August 18: Allows 5 runs in 5 innings. Allows 8 hits.  After the game Deduno speaks to the press indicating he has shoulder problems.  He said that "It started behind the shoulder a couple weeks ago [August 7] , but I could handle that".  "Now it's in the front. I felt it a few days ago [August 13]. Today, I didn't feel good. In the bullpen and during the game, I didn't feel strong."

[In other words, Deduno makes 3 starts with shoulder issues.  It is unclear whether he communicated those issues to the training staff]

August 19:  Consistent with the treatment prescribed, the Twins' training staff diagnose the condition as bicep tendinitis

August 22: Starts against Cleveland. Allows one run in 6 innings in a win at Cleveland. 3 hits, 4 bases on balls

September 9:  The Twins' GM talks to the press about Deduno. Saying that  he might need shoulder surgery but is "not as bad as it sounds" and could rehab instead.  Terry Ryan indicates that Deduno is "battling inflammation" and says that he is "sure that it is scar-tissue related"

September 9 (later in the day): The Twins announce that Deduno has "issues in his labrum and rotator cuff" and might need "just a clean up"

September 13: The Twins indicate that Deduno has "Fraying in the shoulder" recovery timetable is set to two months, should be ready on the onset of Spring Training

December 9: Twins indicate that Deduno has started to playing catch and his rehab progresses (in Fort Myers) as planned and he is still on schedule for Spring Training.

Meanwhile, Terry Ryan signs three free agent pitchers who, in addition to Correia, are all penciled in ahead of Deduno for the 2014 rotation.  Terry Ryan after the season publicly said that "Deduno has pretty much earned a spot on the 2014 rotation", but his actions show that he does not count on Deduno.   Whether he will be ready for Spring Training or not, it will be seen, since there has been pretty much silence on Deduno since September 20.

It has to be noted that Deduno has been very fragile.   Here is his injury and lost days history in his professional career:

The only healthy seasons in Deduno's career were 2006 and 2007.  It looks like his Right Shoulder, Groin and Hip, and Right Elbow (and unfortunately even after Tommy John Surgery) have been his problem areas.   The elbow and shoulder issues are especially worrisome...

I hope that Deduno is healthy, because he pitches in an intriguing way and could help the Twins, but if his history is any guide of the future, he is not to be counted on to have the ball every fifth day.