When Joe Mauer returns, as early as a week from today, a spot should open on the 25-man roster to accommodate him. I think that there are three potential candidates for that spot, in alphabetical order: Brian Buscher, Jose Morales and Micheal Redmond.

Here is how they have been performing this season:

Redmond brings veteran leadership and clubhouse presence. Morales brings a live bat, upside, a spanish-speaking catcher who can communicate with Ayala, Liriano, Mijares and Morillo better than Redmond or Mauer. He is a switch hitter. Buscher brings in a left hand bat from the bench. Both Morales and Buscher still have minor league options.

Redmond and Morales are adequate defensively. They will not throw runners out but will not make errors. Buscher is a defensive liability who does not belong on the field in a major league stadium.

There is more than one way to make that decision and it will be a hard decision to make, since there are advantages and disadvantages to all 3. I think that Morales' bat and the fact that is adequate defensively as a catcher, as well as Redmond's veteran leadership should be chosen over Buscher's LH bat off the bench. Morales has a better LH bat off the bench (as a LH hitter he is batting .300/.333/.400, .733 OPS in 21 PA) than Buscher, anyways, and he is more versatile. If I were to rank the 3 in order of who should stay, it would be: Morales, Redmond, Buscher.

What do you think? Feel free to comment and vote on the poll at the upper left hand side of the blog.
Posted by thrylos98 at 4:00 PM 4 comments:

Micheal Cuddyer was one of the heroes of the 2006 Twins that won the AL Central division in dramatic fashion the last day of the regular season. That season, his age 27 season, he exceeded expectations after establishing himself as the starting right fielder, instead of being moved around in the infield, hitting .284/.362/.504 with 24 HR and 109 RBI. The Twins' organization regarded him as a power right hand bat that could split the franchise lefties, Joe Mauer and Jason Morneau and create a formidable core in the middle of the lineup for years to come. In the off-season after his 2006 season, he signed an one year $3.575 million contract to avoid arbitration. After his 2007 season, which was not as productive (.276/.356/.433 16 HR, 18 RBI), the Twins decided to keep him long term, offering him a 3 year/$25 million contract through 2010 with a team option for 2011 worth $10.5 million. This contract coincided with the departures of Torii Hunter to the Angels via free agency and Johan Santana to the Mets via a trade. The Twins needed a face for their franchise to quell disappointment by these departures and the gregarious and outspoken Cuddyer was cast into that role. There are a lot of arguments against that contract given to Cuddyer after a down season and at age 28; however, it should be clear that this contract was not only for his field production but for his franchise representation to the public. That said, here is the question that I will try to answer:

Are Michael Cuddyer's best days as a player behind him?


To try to answer this question, I will try to examine the following: 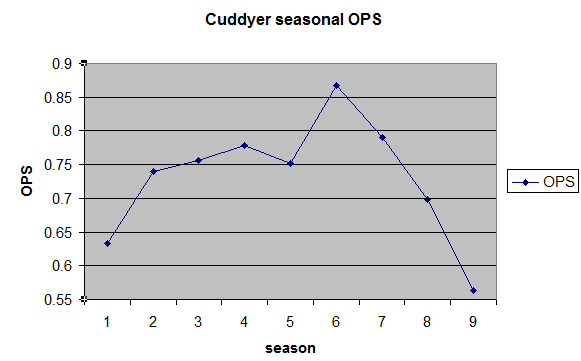 this graph is a plot of Michael Cuddyer's OPS in the different seasons he played. Season 1 is 2001 and season 9 is his current age 30 season.

It is clear that his OPS peaked at season 6, 2006 his age 27 season, and has practically linearly declined since.

the average age peak of these 8 players is age 27. The exact age Michael Cuddyer was during his 2006 season. 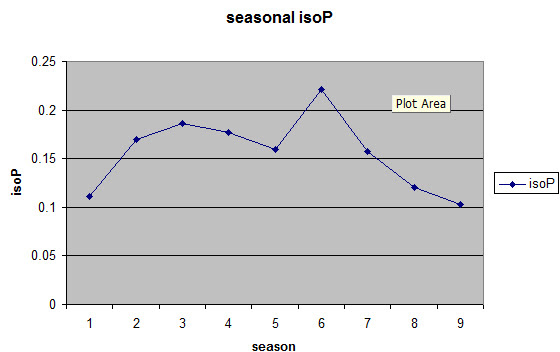 this graph is a plot of Michael Cuddyer's isoP (isolated power = SLG%-batting average) in the different seasons he played. Season 1 is 2001 and season 9 is his current age 30 season. 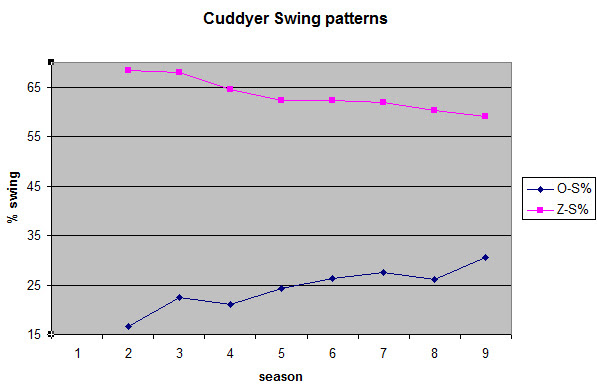 This was a big surprise to me.

The graph above is a plot of the percentage of balls inside the strike zone (Z-S%) and outside of the strike zone (O-S%) that Micheal Cuddyer has been swinging at during the different seasons. There is no data for 2001, so this is from 2002 on.

Cuddyer had a better judgment on balls and strikes at age 23, than he had during his age 27, 2006 season and now


Cuddyer, following the example of Denard Span underwent LASIK eye surgery in the off-season. Based on his early 2009 results, it seems that the surgery did not help him distinguish balls and stikes; if anything it made things worse.

I wanted to get a bit more granular view than seasonal hitting, so I plotted Cuddyer's monthly OPS from the 2004 season to now, to help identify his peak better: 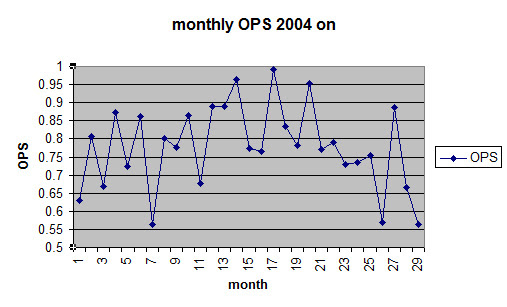 The bottom line is that since May 2007, when Cuddyer had an OPS of .954 in 100 plate appearances, with the exception of June of 2008 when his OPS was .866 in 91 plate appearances, Cuddyer a. did not have a single month with OPS higher than .800, and b. his OPS has been practically declining month by month.

This is not good news.

At this point, there are a lot of indicators, that Cuddyer's best days are over. The swing graphs and the monthly and seasonal OPS drops are somewhat disheartening. However, the June of 2008 provides a glimmer of hope, despite all the other negative indicators. Potentially Cuddyer might have similar months, however even these months will probably not be close to his 2006 production. I think that the Twins should focus on giving more time to Carlos Gomez and Delmon Young, whose best days are ahead of them and give Cuddyer a more limited role, similar to that of Craig Monroe and Randy Ruiz of the 2008 season. Cuddyer will be better than both of them in that role and will be positive for the team. Yes, he will be an overpaid bench/role player, however, as I indicated earlier, part of his contract was because his off-field role, so the "overpayment" for a limited on-field role is mitigated. And if he shows signs that he might have months like the June of 2008, his role could increase for that month and return to limited upon signs of decline (easy to spot based on swinging tendencies)
Posted by thrylos98 at 10:57 AM 17 comments:

This off day I was planning or writing something about the catching situation, but since there were a few new developments on the pitching side, I decided not to ignore those. Since it looks like there will be a rain out tomorrow, I will discuss catching tomorrow.

It is old news by now, but Jesse Crain has been placed at the 15-day DL retroactive to a couple days ago and Jose Mijares has been called up from Rochester to replace him. LEN3 was the first to break that story. Mijares after an awful spring when he showed up in camp looking like Pat Williams and pitching in a way that made Kevin Frederick look like a Cy Young candidate, seems to have found parts of his last September in Rocherster, where in five games he amassed these numbers: 6.1 IP, 2 H, 1 BB, 4 K, 0 ER (0.00 ERA, 0.47 WHIP.) Crain did get overused so far this season. It was inexcusable for Gardy to put him in the 9th inning to close a blow out game. That is done, it cannot be corrected, but I hope that Gardenhire realizes his mistake and does not repeat it. Speaking of repeating mistakes, when Gardenhire was asked about who the set up man will be now, he answered that everyone who is rested except Morillo who is still "a project". Wrong answer. He should select one (even pull names off a a hat) and go with him. The worse thing about a reliever is not knowing what his role is. Pitchers need to get ready to pitch. I hope that Crain gets healthy soon and that he returns effective because he showed signs of brilliance so far this season.

A lot of people are climbing on Glen Perkins' bandwagon this season and with a good reason: he has been the most effective starter on the staff. Yesterday in the Angels series' review I wrote the following about Perkins:

The Perkins of 2009 so far is different than the Perkins of 2008: He apparently worked on his change up and slider this off-season and unlike last year, he has complimentary pitches to his fastball. His slider still needs work, but his change up is very effective. And when he is down on the count he does not throw fastballs in the middle of the plate like he did in 2008. This allows him to get through innings with fewer pitches and pitch deeper into the games

And because a picture is supposedly worth a thousand words, I will save myself two thousand and present you with these two from one of the great baseball sites out there, Brooksbaseball.net, to illustrate my previous point.

This is a graph of pitch number on the X axis and pitch velocity on the Y axis. This is Perkins pitching in yesterday's game against the Angels. As you can see, it is rare that he is throwing more than 2 fastballs in a row and there is a great mix between fastballs and off-speed pitches. 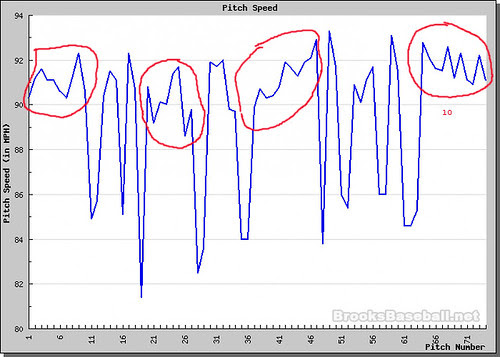 This is from a typical Perkins' outing in 2008. The 8/14 game in Seattle: He throwed a series of only fastballs four times (red circles-me-Bert), very few off-speed pitches, and when he got in trouble towards the end of his outing he threw 10 straight fastballs. This was not the way to pitch successfully and I had indicated ad noseum last season, that if this continues, Perkins does not belong in a major league rotation.

I am very happy that this has change and I hope that Glen keeps it up and when in trouble does not revert to bad habits.

The general opinion is that the Twins' starters have struggled last season:

here is a little known fact: The Twins (co-lead the majors) with 9 starters going more than six innings. I hope this makes the Twins' fans feel a little better.
Posted by thrylos98 at 5:57 PM 10 comments:

looking between the lines: four series down

The Twins finished the four first series of the young season, sweeping the Los Angeles Angels of Anaheim in the Metrodome in a three game series. After 14 games they are 1 game out of first place in the AL Central division, trailing the Detroit Tigers, Chicago White Sox and Kansas City Royals, while they are leading the last place Cleveland Indians by 2.5 games. Here are my observations about the team at this time point:


Position Player MVP of the series with the Angels: 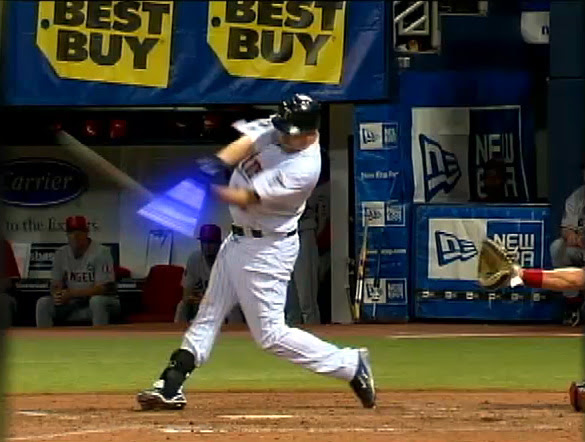 Best Pitcher of the series with the Angels: