From AJ to DJ to Eddie, but no Sano: Rock Cats at Fighting Phils Saturday night.

Despite the current drama within the Twins' organization with their future star third baseman, which is getting to be about as bad as that of the Yankees with their former star third baseman, and unsure whether the unanimous number three prospect in baseball will play, I made the forty five minute trip to Reading (think of "ready" when pronouncing it, not "righting" and "rithmetic") to watch the Rock Cats face the Phillies' AA team, the Reading Fighting Phils.  The major attraction in my book was DJ Baxendale starting (whom I last watched live in Spring Training making the unanimous number one prospect in baseball look like a fool, striking out in three pitches.)

Baxendale was different tonight.   Not sure whether it had to do with his recent three week stint in the disabled list, but his fastball was down a couple notches to 88-90 mph and he had a hard time command it, the way he did in the spring.  This game was almost rained out, but when he pitched the weather was not a factor.  His curveball in low 70s was his best pitch and he showed great command throwing for strikes and intentionally throwing it at the dirt.  Low 80s change up did have movement, but for some reason he was not throwing much of it.  I did not see any sliders.  His main arsenal was the curve today and he threw it a lot.   So he did not have his best stuff out there, but he looked very poised pitching despite that.  I checked him on the centerfield camera a couple times and the way he pitches reminds me of Brad Radke, but substitute curve for change up.  Very similar fluid mechanics with good follow through and easy motion.   In addition to not being 100% he was unlucky:  Nate Hanson let a couple of catchable balls go through at third (one for a double) and Jordan Paraz let a catchable ball fly over his head in short center.  These were good for 3 runs.  Add a Reading batter who got "hit" on the toe, but did not try to get out of the way and a two run error on Dan Rohlfing and you get the rest of the picture.

Eddie Rosario was impressive.  He might be the second player who will make it in the bigs from this bunch.  Excellent speed and very good feet and even cutting motion at second.  He is owning the position.  Add a batting average around .320 (he was batting third) and he might be on his way soon.  I have seen him hit and I know that he can hit, but color me very impressed with his glove at second.  For sure he will rise on the lists as soon as the national writers see him play.  He changed his number from 2 to 13.  This was what he was wearing today.  Rumors that he did it in support of Jerry White, are unsubstantiated.

Josmil Pinto likely will be the first guy up from this squad, maybe as soon as September, or earlier, trading deadline deals willing.  Since last Spring, he gained a good 20 pounds of solid muscle and looks pretty dominant out there.  He was the DH tonight.

I did not have much change to see Danny Santana and Danny Ortiz play live, but they are both solid with the bat.  Santana is very fast as well and he flashes a nice glove at short.  Definitely a possibility at short with the big club.

Evan Bigley seems to slowly get back from his injury, which is a shame because he was close to becoming a mainstay in Rochester in a season that the big club is very thin in outfielders.   Journeymen Reynaldo Rodriguez and Jordan Paraz, neither of who have any future with the Twins were at first (Kennys Vargas anyone?) and center.  Nate Hanson was plainly disappointing with the glove today and he is 26.  I think that this might be the end of the road for him.  Dan Rohlfing has had a puzzling season.  After a great Spring, he has a very miserable summer both at the plate and on the field.  Blake Martin was better than I remember, with a fastball in the 90s and a variety of off-speed stuff.  Might have some future as a "crafty lefty", but he is 27 and the organization is full of these type of pitchers.

AJ Pettersen did not play.  So did Angel Morales and Miguel Sano.  I am not going to get into the Sano drama in this piece.  Morales and Sano shared first base coach duty.

I took a whole bunch of pictures, but will put them up later, because it is getting late here on the east coast.  But I am leaving you with the following parting shot: 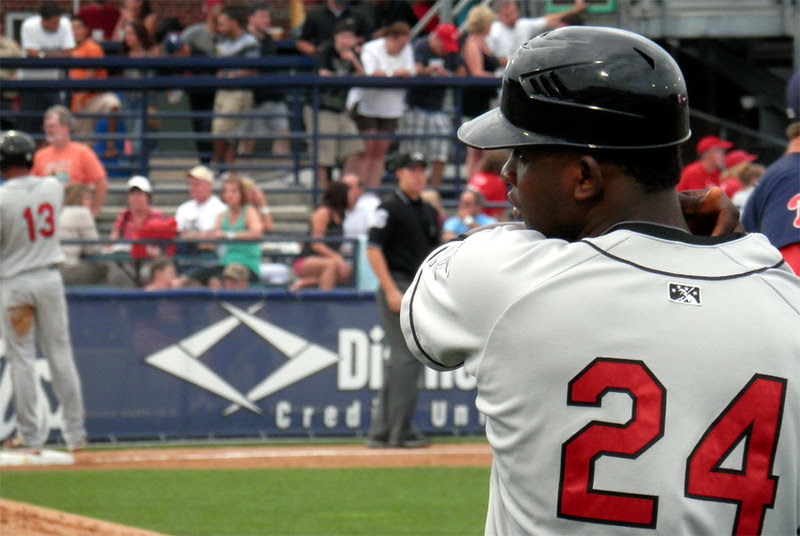 The skies opened on the top of the seventh inning with thunder while the score was 2-8.  I did not stay any longer.
Posted by thrylos98 at 11:30 PM No comments: