Who is Ramon Santana?

Ramoncito (Ramon) Santana is probably one of the biggest, if not the biggest, surprise in the Twins' minor league system this young season. Here is a closer look at Ramon:


Ramon, a diminutive (generously listed at 5'9" and 152 lbs) right handed middle infielder, was signed as a free agent from Venezuela by the Twins in 2004. His first professional season was in 2006 at age 20 with the Dominican Summer League Twins, where he joined a team that also included Rene Leveret, Santos Arias, Danny Rondon, Yangervis Solarte, Alexander Soto, Henry Reyes, and Jeanfred Brito. That was one of the most successful DSL squads since all the aforementioned made the jump to the US and joined either the GCL Twins (R-) or the Elizabethton Twins (R) for the 2007 season.

In 2006 season, Ramon appeared in 50 games and had 223 plate appearances for the DSL Twins splitting time between second base and short stop. It was a very productive season for him. He hit .313/.448/.528 (.977 OPS, team leading .215 isoP) team leading 8 HR, walked 38 times, while struck out 37 and drove in 30. These numbers are great for a corner infielder or outfielder, but simply phenomenal for a middle infielder, in both power and plate discipline. In 2007 Ramon Santana along with a slew of his DSL teammates made the trip up north to play in the US-based minor leagues. The transition was not kind to Ramon. In 2007 he was assigned to the Gulf Coast League Twins (low Rookie) where he appeared in just 18 games (66 PA) hitting an unremarkable .211/.288/.351. In the middle of 2007 season, because of injury to Chris Cates and promotion of Brian Dinkelman to Ft. Myers, the Twins assigned Santana to the Beloit Snappers (Midwest League, A), effectively by-passing the high Rookie Elizabethton. In 15 games and 50 plate appearances in Beloit, Santana hit .225/.347/.325. This was better than his Elizabethton numbers, esp. in the plate discipline aspect, but still lacking in the contact and power aspects. In 2008, instead of starting the season in Elizabethton, Santana repeated in Beloit, where he appeared in 75 games (280 PA) and hit .241/.316/.404 with 8 HR. His 8 home runs were second in the team behind Chris Parmelee's 14, tied with Gregory Yersich's 8 but happened in 80 fewer plate appearances than Yersich. Unfortunately, last season Santana shown to be prone to strike outs, walking 18 times and striking out 84.

The 2009 season has all the elements of a breakthrough season for Santana. In 15 games and 52 plate appearances (very similar to his plate appearances with the Beloit squad in 2007) he is hitting .356/.476/.615 (1.092 OPS, .250 isoP) with a team-leading 3 HR. Also he walked 10 times and struck out 15. It looks like his power and plate discipline are back. He is enshrined at the #3 spot in the batting order and has appeared in more games and has the most plate appearances of all Snappers.

Ramon Santana has been a very pleasant surprise for the Twins' organization this season. It is not inconceivable that he might move to Ft. Myers as the season progresses, esp. if Steven Tolleson moves to Rochester, creating a Domino effect of promotions in the organization. Santana is a better second baseman than a short stop on the field and the Twins' organization has several good middle infielder prospects, however nobody has Santana's power bat, except Luke Hughes, who these days is playing more corner infield and outfield positions.

A Blast from the Past

After Glen Perkins' last start, I posted an entry suggesting that this is a new and improved Glen Perkins because this season, unlike 2008 when he was the weakest link in the Twins' rotation, he managed to keep the hitters off balance by changing speaks.

Today at Cleveland, Glen Perkins converted to his old ways. This is a graph of pitch number vs pitch speed from his appearance today, from Brooks Baseball: 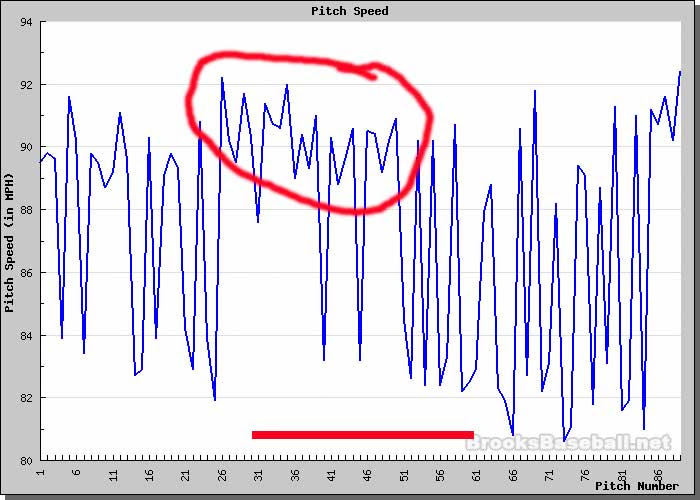 As you can see, there was a series of 21 pitches all within 4 mph of each other with the exception of two pitches (red circle). This is not good and it coincided with his 3-run third inning (red bar below.) Perkins just cannot do that if he wants to be effective. He cannot throw 19 out of 21 fastballs in a row and survive in the bigs. I think that his problem is clear, he should know it, Anderson should know it, the catchers should not it and he just got to stop doing it. Otherwise, I am afraid, that he will be the Perkins of old, who is not that good...
Posted by thrylos98 at 7:38 PM 5 comments: