Three things the Twins need to do to compete in 2015: Part II: Fix the outfield

In the first part of this series, I discussed why the Twins should focus only on improving 3 things, and if they do so, they will be competitive.  I also spoke in length about the first of those things, fixing the bullpen.  Today, in the second part, I will be discussing the outfield.

In the bullpen segment I indicated that the Twins' bullpen was 27th in the majors in ground ball percentage.  The overall pitching (including the rotation) was also 27th in the majors in this metric.  This had a compound effect:  The pitching resulted in a lot of balls on the air, and the defenders who were supposed to catch those balls could not.  And this is an issue; how large of an issue?  According to the above calculations, it was a 10 win issue.   That plus/minus was by far the worst in the majors outfield defense.  The second worst outfield, according to that metric, was the Indians' with -43.  It is pretty interesting that other than the Royals who led the majors in plus/minus with +37, the rest of AL Central (Tigers at -22 and White Sox at -21) was also at the wrong side of zero.

This was a very obvious problem and needed addressing this off-season.  What did the Twins' do in the off-season to address this?

b. They have Oswaldo Arcia switch from Right to Left

and last but not least

f. they pinky swore that they will not play catchers, DHs and shortstops at the outfield (maybe they should play Nunez on occasion, he is a pretty good left fielder.)  Presumably the aforementioned 5 outfielders will take those innings.

How will that work?  On paper, this is pretty much the same outfield that was the most awful outfield in the majors.   In reality, the last point (f, i.e no Kubel, Bartlett, Colabello, Parmelee et al), has the potential to make this outfield about 29 runs better than it was in plus/minus (that's approaching Tigers & White Sox territory.) And it could potentially be better.   The starting Twins' OF looks like Arcia at Left, Hicks and/or Schafer at Center and Hunter at Right.  For this, let's assume that Hicks will win the CF position and Schafer will play in all 3 spots.

Allegedly, according to the Twins General Manager Terry Ryan, Arcia had problems with the RF overhang at Target Field that caused his fielding problems.   Terry Ryan suggests that Arcia "was a pretty good minor league outfielder".   From what I have seen, Arcia has been an average corner outfielder (Ryan's suggestion, btw, in that linked piece that Arcia was "a pretty good center fielder" is pretty inaccurate, esp. as far as range is concerned.)  Most fielding measures, have Arcia being a better Left Fielder than Right Fielder (and some of them, like Total Zone Fielding Runs Saved Above Average (Rtot), have him as a slightly above average Left Fielder.  Plus, he is young and has the potential to improve.  In 2014 the Twins as a team used eleven different Left Fielders (none of them Named Oswaldo or Arcia) who accounted to -4 Rtot for the season.  Arcia's Left Field performance in 2013 projects to +5 Rtot/year; so this is a 9 run differential.  If Hicks (51 Rtot/yr at LF; small sample size 22 Innings) or Schafer (career 13 Rtot/yr, 2014 21 Rtot/yr at LF) or Shane Robinson (career 5 Rtot/yr at LF) play 25% of the games there and Arcia 75%, we are looking more at a 12 run differential in the position from 2014.

In 2014 the Twins used seven different Center fielders who accounted for -9 Rtot for the season.  Hick's performance on CF in 2013 was 3 Rtot/yr, then went downhill in 2014 for a career of +1 Rtot/yr.   In 2014 Schafer had a +1 Rtot/yr as a Center Fielder in a smaller sample size between Atlanta and Minnesota.  Assuming that Hicks will start and Schafer will be the back up, I think that it is safe to say that we are looking at a baseline of around 1 or a 10 run differential at Center Field, which is just a baseline, because with Hicks getting consistent play and back to 2013 levels, it could be close to 13-15 runs.

The Twins used ten different Right Fielders in 2014 who accounted for a whopping -17 Rtot for the season, which was in par with Torii Hunter's -18 Rtot/yr for 2014.  Do you remember that point in the listing above under a., regarding Torii Hunter's exponential UZR/150 drop the past 3 seasons?  It is the same for his Rtot/yr:  It dropped for +4 in 2012 to -5 in 2013 to -18 in 2014.   And by looking at film of Torii's outfield adventures with Detroit, I think that it is potentially fixable.  Most of his issues were from taking bad routes to balls, misjudging balls, missing balls and the like, indicating that he had a hard time getting a good look and a good jump and positioning.  Torii Hunter is the oldest fielder in the majors.  I am pretty sure that I saw Torii Hunter wearing eyeglasses in an interview with MLB Network when with the Angels regarding the Pujols' signing.  So, one plus one means that he needs to see an ophthalmologist, which might had happened during the off-season.   I also hope that he will take a lot of fly balls out there, as well.  If Hunter's fielding returns to his (below average) 2013 levels of -5 Rtot/yr, we are looking at a 12 run differential at Right Field.   Right Field is Jordan Schafer's best position with 22 Rtot/yr.  So assuming Schafer as a late inning replacement or starting 20%  of the games there, a 14 run differential at Right Field is realistic.

So, the total differential is about 36 runs, or 6 wins better than 2014, using this calculation.  This still projects a below average outfield (basically because of Hunter at RF,) just not an outfield as horrible as 2014.  Thus the 36 run differential vs the 57 for an average with that calculation.  Can the outfield get even closer to average?

Another note about 2014:  I believe that part of the bad performance at the outfield was the on the manager.  11 LFs + 7 CFs + 10 RFs (14 different individual players in total) adds to exponential combinations and an outfield needs to play together to gel.  The most games a player started in any OF position was Arcia at RF with 97 at Center Field Santana (62) and at Left Field Willingham (52) led in starts.   You cannot build consistency this way.  This matter cannot be calculated, but will definitely add to the sum total of the fielding performance of the 2015 outfield.  The musical chairs need to stop and have four to five rear ends landing on them and not fourteen.  That was begging for trouble and trouble was what the Twins' got with their OF defense in 2014.  A consistent outfield will improve the individual performances and will be the only way that the Twins' OF defense will get close to league average... 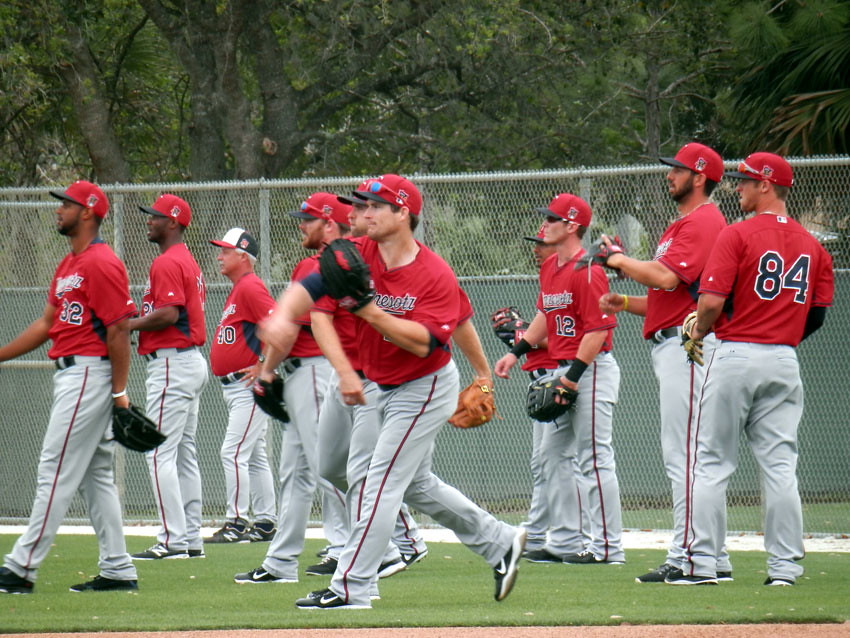